SSO: The Rage of Montalbano Powered by Crowd Ox
Website

SSO is a card driven game of co-ordination, planning and action management in a world of brutal sci-fi survival.  It will place from one to six players into a narrative driven world of tension and desperation telling stories of knife-edge escapes pulled from sources ranging from 2001: A Space Odyssey to Star Trek: The Wrath of Khan.

SSO tells the continuing story of the S.S. Omega, a space ship tasked with a mission vital to the survival of humanity, a ship with a mysteriously absent crew.  Players take the part of a rescue team that must guide the Omega to the completion of its mission. Players will investigate the deserted ship, uncover the catastrophic events which befell it and pilot the ship to its destiny.

Players win or lose independently, but if the ship shuts down or runs out of oxygen all crew will die and all players fail.  Players can work together to increase the ship's oxygen supply, repair its failing systems and complete missions triggered by the Challenge Deck.  Of course, limited oxygen is only a problem if there are too many people breathing, and players are free to conclude that death of the many can mean survival for the few, or the one.

"SSO: Rage of Montalbano" is a deluxe expansion of our popular SSO base set, which successfully funded on Kickstarter in 2018.  Its tight decision making and tough gameplay were a hit with fans, but the small budget and tiny box meant minimal components.  The £12 "Rage of Montalbano" reward level includes the expansion alone, but all tiers from "Entry Level" upwards include a copy of the base set.

The SSO: Rage of Montalbano deluxe expansion adds a whole host of features to the high on gameplay, minimal components action of the SSO base set.

In addition, this campaign will feature the first chance to obtain the new Challenge Deck, "Temporal Anomaly", the first challenge deck selected by backers of SSO during our original Kickstarter.

SSO's base set builds a ship and provides players with the crew to investigate it, but its story is driven by the game's "Challenge Deck".  Each Challenge Deck consists of a series of cards, built and balanced to tell a specific narrative of terror and survival aboard the Omega.  The Challenge Deck is entirely modular and can be slotted out and replaced for endless replayability, depending on whether players wish to be wiped out by a malicious computer, hunted by a former crew mate or suffer the brutal assault of an unknown life form.  In fact, game play tension can be vastly increased by using the random Challenge Deck selection process such that players never know which death will befall them until it strikes.

SSO's Challenge Deck represents any of a range of vicious, aggressive, deadly threats to the players. It will shut off locations when they are their most crowded, vent oxygen when it is most precious, attack the morale of the crew when they are at their lowest ebb, and pick off members of the team when they are at their weakest. Players will unite as a team against this seemingly conscious enemy or be torn apart to attempt piecemeal survival in the face of its terrors. 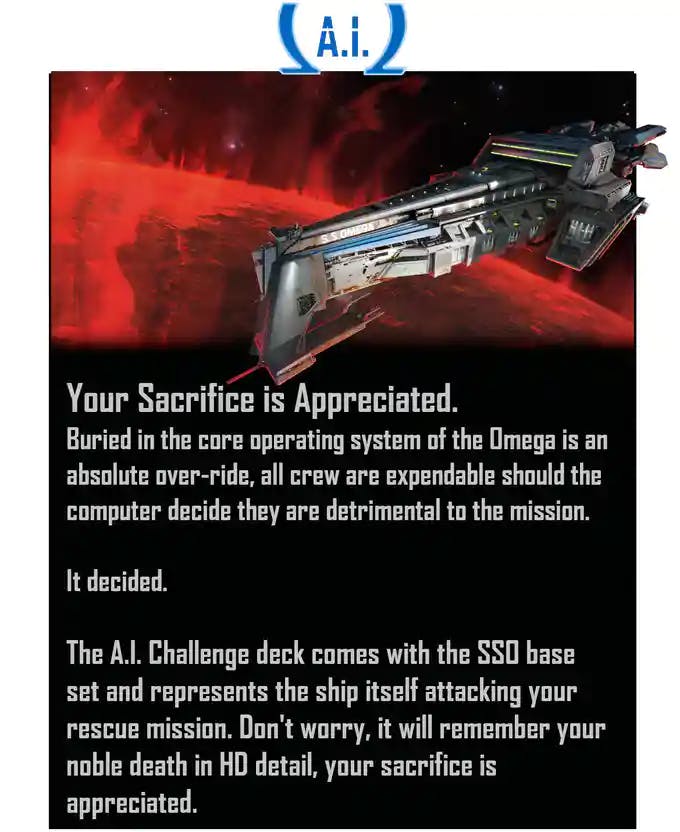 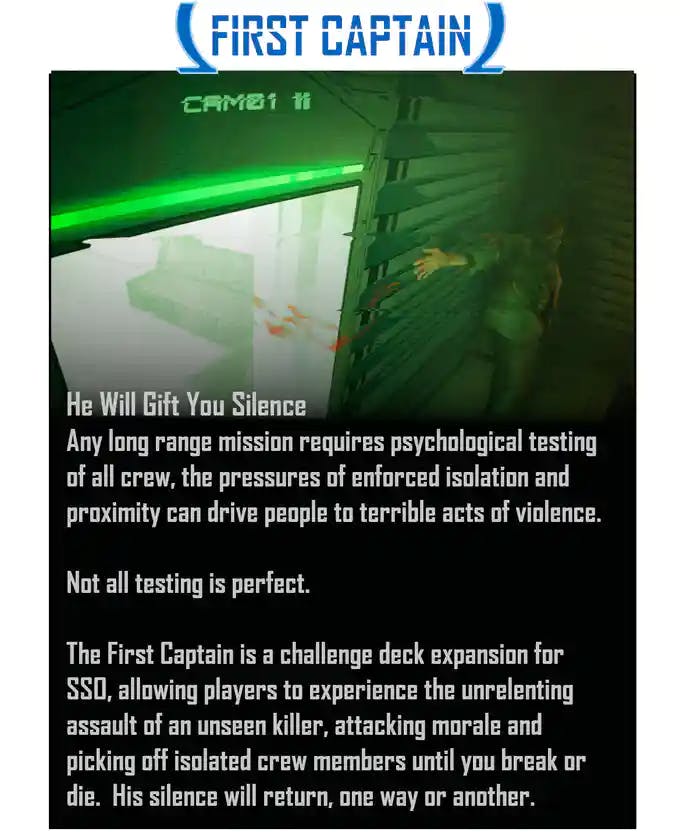 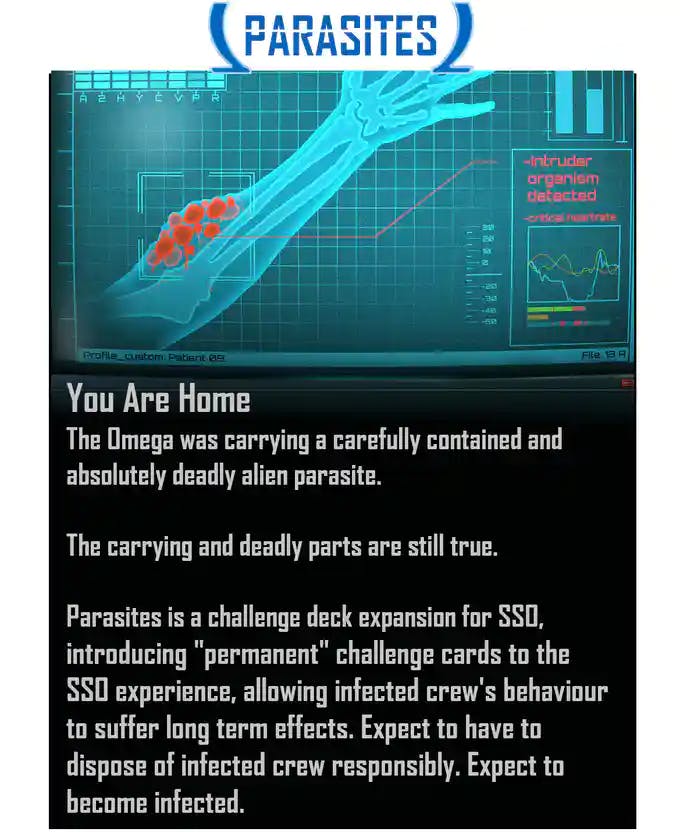 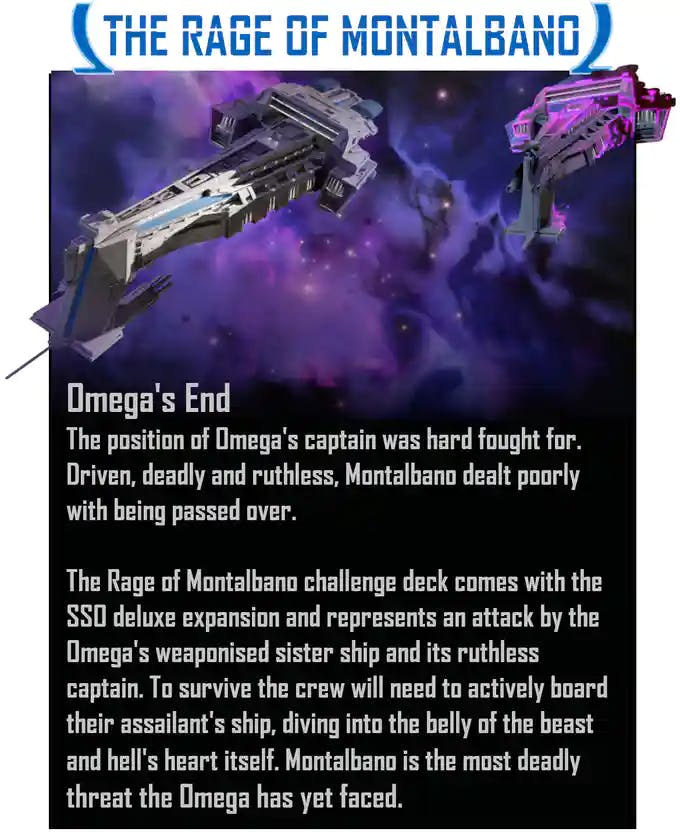 SSO is a game for 1-6 players; all rules are the same for solo play as for multi-player games. A game will last 45-90 minutes depending on player experience and decisiveness.

We've taken player feedback on the rules for the SSO base set and have created the Rage of Montalbano extended rule book based on that feedback.  It has more examples, diagrams and explanations for increased clarity, we're very proud of it, but are always open to further feedback from backers.  To keep up to date with any changes, check out the current raw text version and give us your feedback. 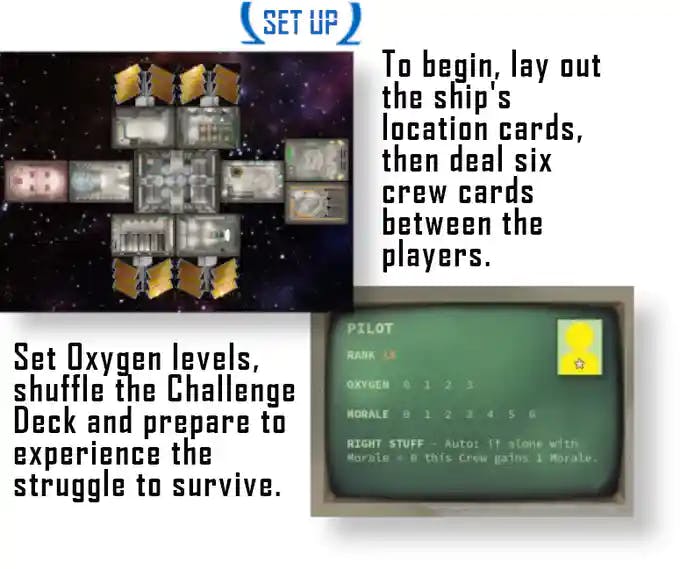 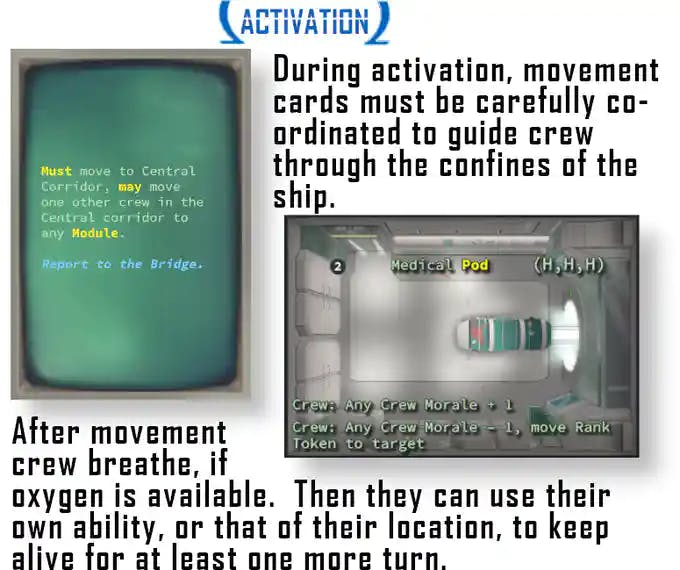 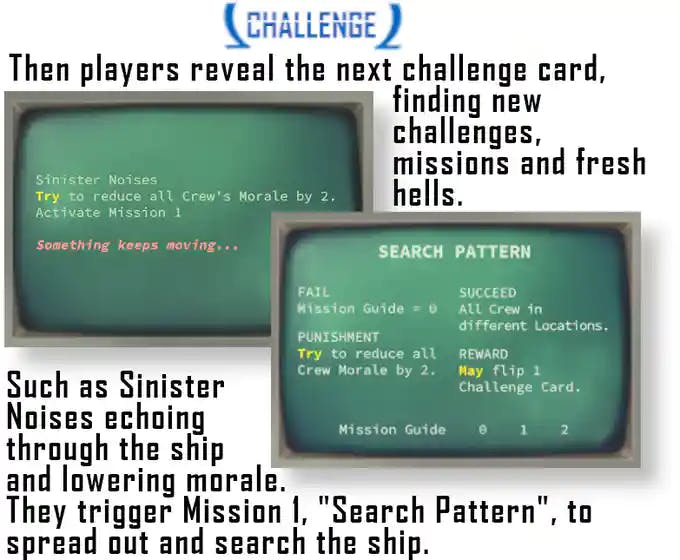 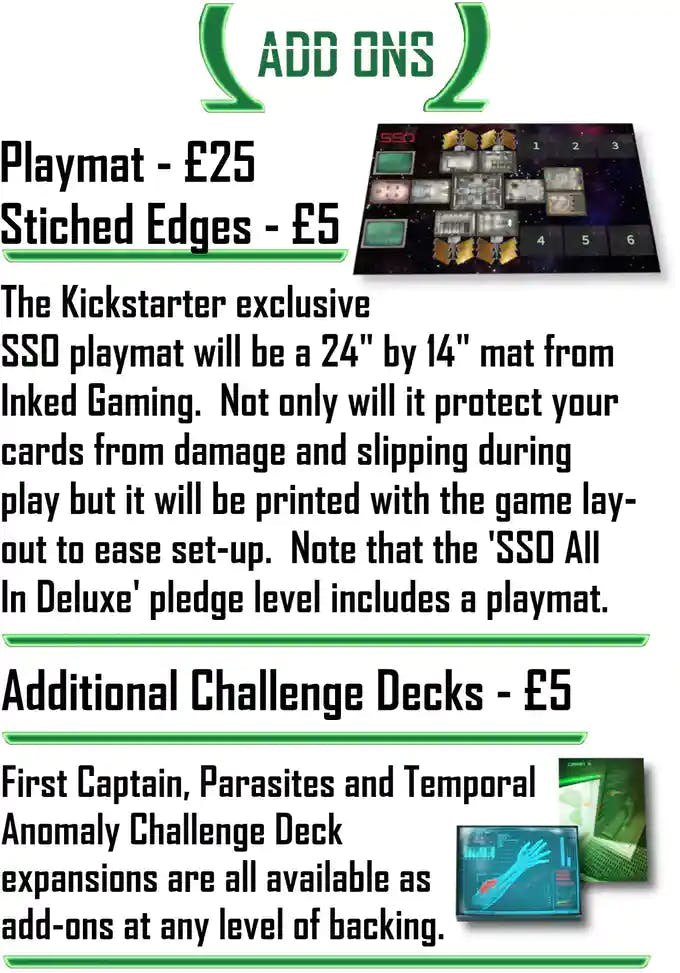 All of our reviews are unpaid, except for (in some cases) a free copy of the game. 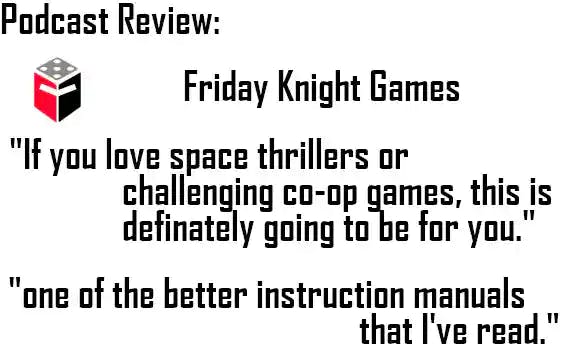 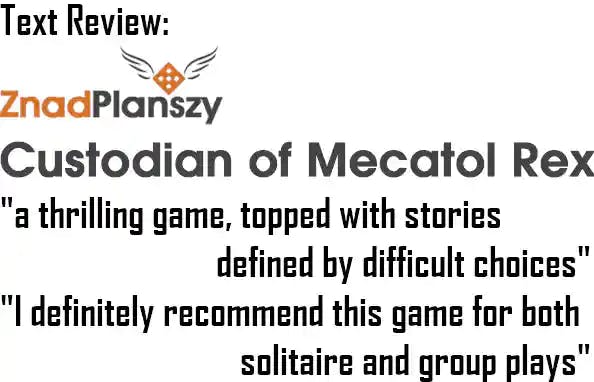 This print review is also available in Polish here.

SSO is available to play on Tabletop Simulator through Steam so you can try before you back.  Just click the banner below and subscribe to the workshop to try it out.

Man O' Kent games is a tiny independent games publisher what being such a small company means is that we struggle to achieve distribution or retail placement, so while our projects are not Kickstarter exclusives you are unlikely to see them in general retail.  Unless you're lucky enough to catch us live at a convention this will be the best shipping price and lowest cost version of our games you'll ever see, so waiting for retail is unlikely to be an option.  We have completed and fulfilled previous Kickstarter projects, we're here for the long haul and are committed to supporting everything we do into the future.  You can rely on us to hold up our end of the bargain, but we can't do it without you.  This isn't a pre-order that you can just get onto the standard delivery version of later, this is for real.

All UK delivery costs are included in the pledge levels.  For backers in the rest of the world shipping is £6.

Our shipping is UK based and will be taking place most likely post official Brexit, as such we are not certain of being able to offer EU friendly shipping.

From initial development onwards SSO has been through around three years of development and playtesting including feedback from the initial release of the base set.  Kickstarter timelines are notoriously difficult to judge, post Kickstarter we may have to alter files depending on stretch goals or feedback from backers and will ultimately be at the mercy of manufacture, shipping and customs.  However, our expected timeline looks like this:

Our Funding Goal is set at a level to cover printing and fulfillment of the deluxe expansion, which is to say manufacturing costs with Long Pack, import taxes, Kickstarter charges and shipping fees from China.  We make profit if the project over-backs and from sales post-Kickstarter.  The Kickstarter goal is designed only to ensure that from launch of the project to fulfillment that we do not end up out of pocket.  Illustration and graphic design costs have already been covered and completed during development.

We are Man O' Kent Games, an independent games designer and publisher.  SSO:  The Rage of Montalbano is our third Kickstarter project following successful backing and fulfillment on the original SSO and our Deck Unbuilder, Moonflight. We are led by Glenn Ford, previously Games Developer on Osprey Games' Gaslands (winner of the People's and Judge's Choice Award at UKGE 2018) and A Billion Suns. Artwork is supplied by Henry Peters and Bluepepper Designs, and we'll be printing with Long Pack Games. 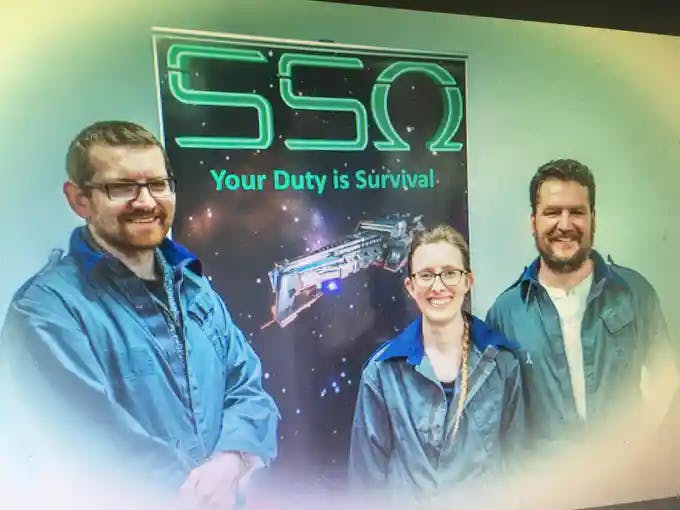 Available on the "Full Man O' Kent Package' pledge level, Moonflight, the Deck Un-Builder is our previous Kickstarter project, which can be viewed here, with further details on our website, BGG and facebook.  It is a 1-4 player deck builder set in the weird and fae twilight world of Moonflight, but is something more, a new concept of the deck Un-builder.Players take the part of one of the strange and changeable Jacks of Moonflight, building their deck and their power for the first half of the game.  But when the game turns all cards spin to their alternate deck unbuilding side, unlocking trashing abilities and requiring players to thin out their decks back down to a single scoring hand to win.  Build elegantly and unbuild efficiently to score the perfect hand when the Moonfalls.The Moon is Full, The Flight is On. 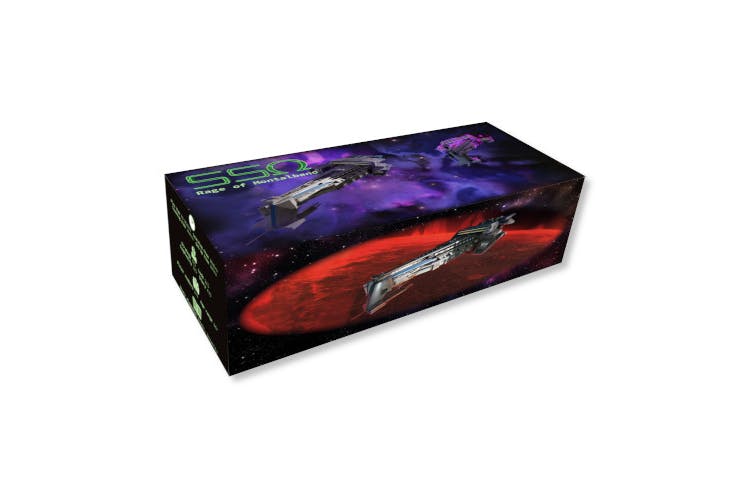 The Rage of Montalbano

Rage of Montalbano Deluxe Expansion at reduced loyalty price, not a complete game, requires the SSO base set to play.
Pledge £12

SSO base set including the Rage of Montalbano Deluxe Expansion.
Pledge £24

SSO base set and the full range of expansions currently available.
Pledge £39 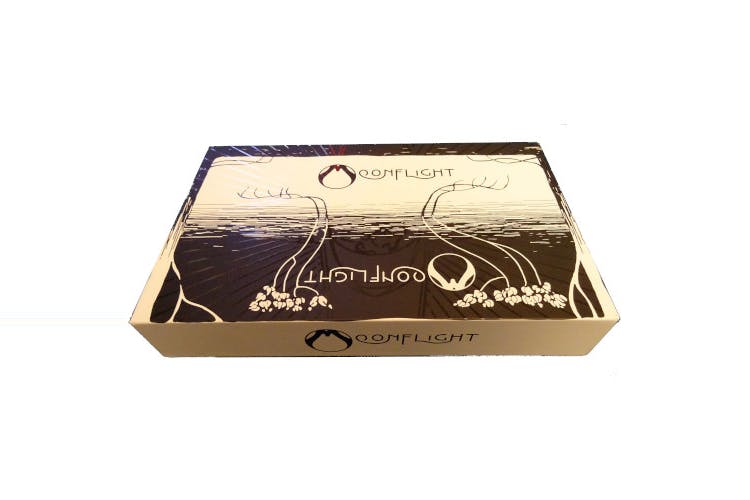 Man O' Kent Games All In

The full Man O' Kent range of games.
Pledge £63
Did you miss or lose the link to complete your Survey? Retrieve it here