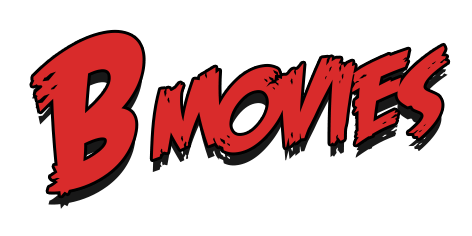 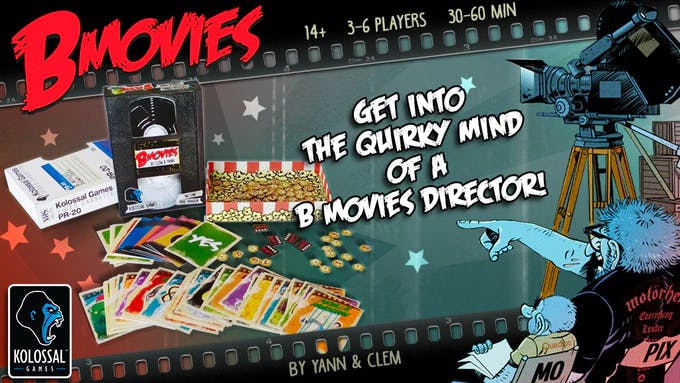 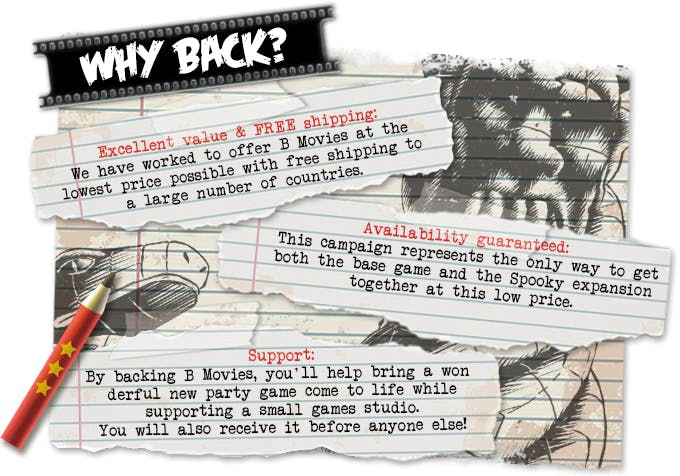 Kolossal Games is proud to present B Movies. B Movies is a highly thematic party game drawing inspiration from the classic low budget sci-fi films. With its unique art style, variable ways to play, and engaging gameplay, B Movies brings everyone to the table. Is your script good enough to become a cult classic?

Dive into the hilarious universe of low-budget science-fiction and horror movies. The unique artwork from Pixel Vengeur and MO/CDM creates a retro atmosphere from the moment you open the VHS like the game box!

From Ghost Piranhas in Space to Time Travelling Brain Collectors, create your very own B Movie scenario! 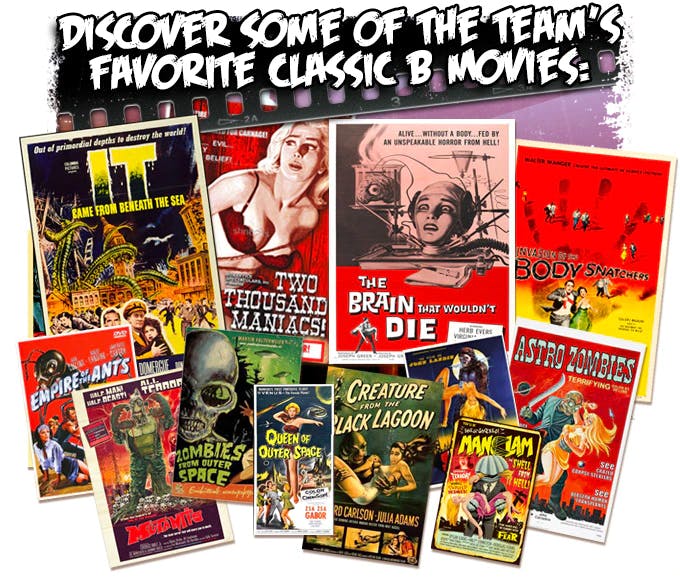 Join the interactive B Movies campaign and help the Kolossal Games team create the movie title and artwork for the VHS game box sleeve!

“Make it spookier”: Give your movie a supernatural flare with new title cards to add to your pitch. Each day during the campaign, we will release one or more new title cards!

→ Have a look at the “Stretch Goals” section 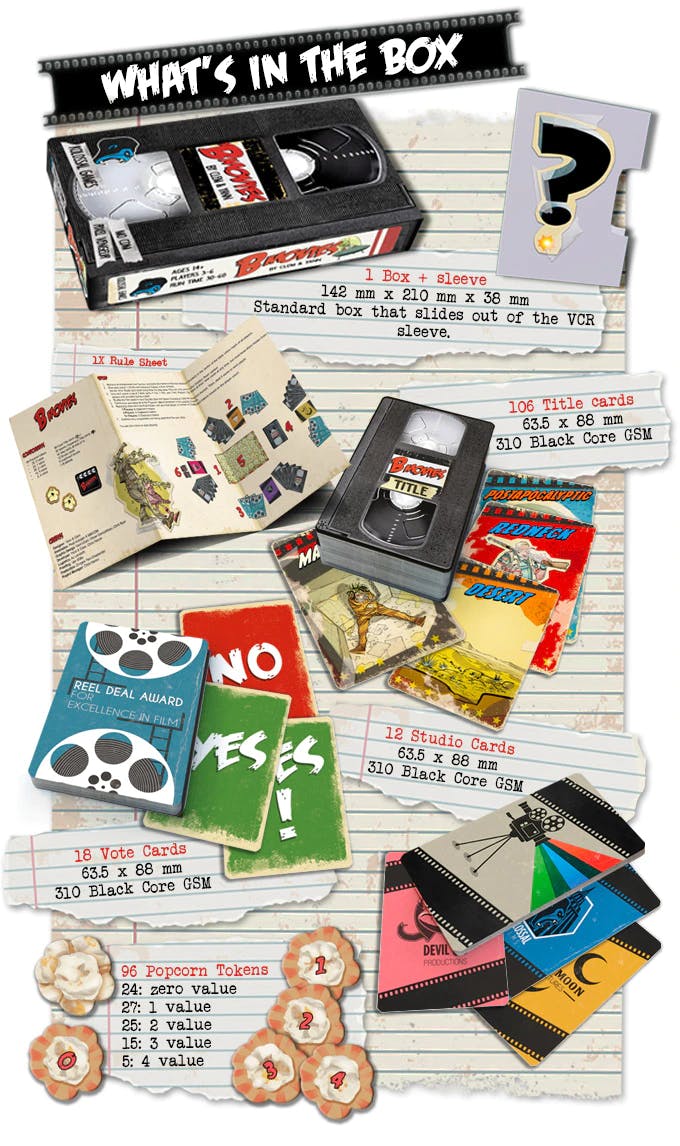 B Movies is played over a number of rounds determined by the player count.

→ Take on the role of the Screenwriter and make your pitch to the other players who are Producers.

→ Producers vote to either reject their pitch or make it into a movie: No, Yes, or Yes! All producers who voted Yes or No and are on the winning side of the vote gains 1 Popcorn token. Any player voting Yes! gains Popcorn tokens equal to the number of cards in the movie if the Yes votes win.

→ The next player then takes on the role of the Screenwriter and pitches a movie.

→ You gain points for the movies you successfully pitched as Screenwriters

→ You gain points from the popcorn tokens earned as Producers.

The player with the most points is the winner and the greatest B Movie mogul of all! 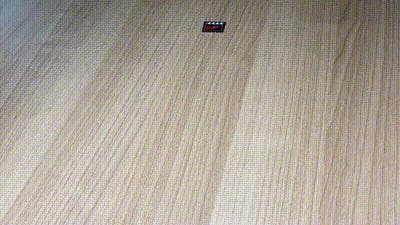 As all participants for the top disco dancers competition get ready in the Nevada desert, bizarre disappearances and brutal murders put the county sheriff to the test.

Things got worse when a horde of hungry rabbits attacked the audience in the middle of a performance.

As the rabbits reproduce and multiply at an amazing rate, the survivors gather together. Will the power of disco be enough to save them from this hell? 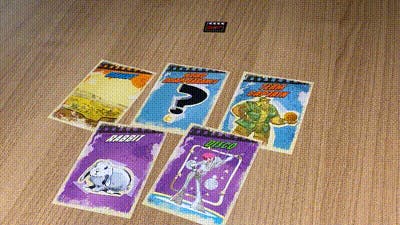 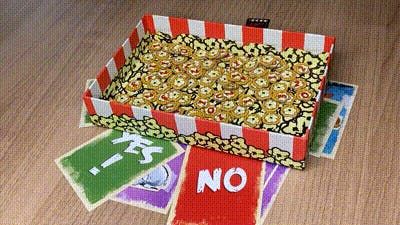 The "Hidden Team variant" plays the same as the standard B Movies game with one small twist; players don't know who is on their team. Depending on player count, there will be anywhere from 1 to 3 teams of players competing against each other. Teams are only revealed during the Final Cut for a surprise ending!

Give your movie a supernatural flare with new title cards to add to your pitch. Each day during the campaign, we will release one or more new title cards! 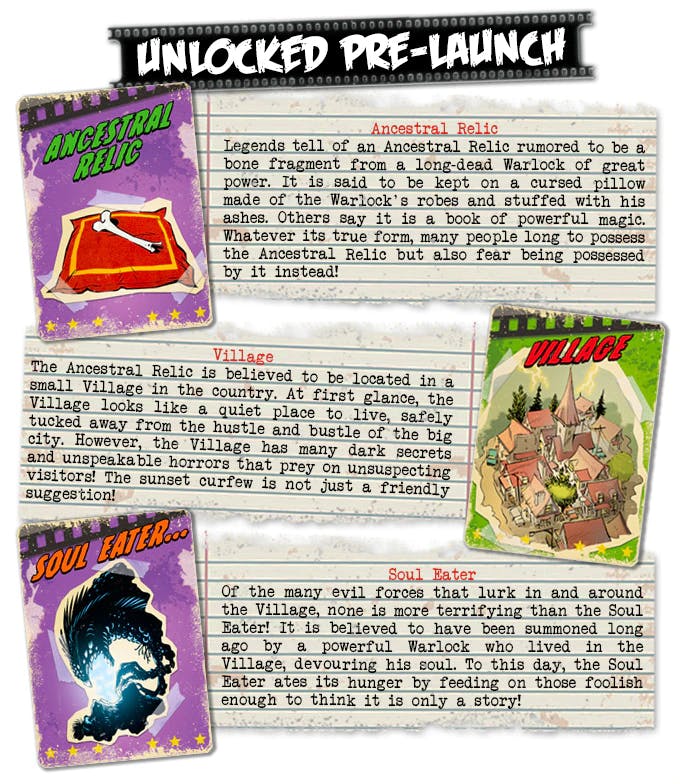 Let’s make the best B Movie title together, and create an original piece of movie art for the box sleeve by voting in 5 polls over the course of the campaign!

→ Second poll: from October 29 to November 2

→ Last poll: from November 9 to the end of the campaign

Along with the campaign, we’ll open the polls to go on with this title and make it complete, as one of the B Movies we love.

Let’s go for the final poll!

The first poll ends just 48 hours after launch, so be sure to vote! The final poll ends at midnight on the last day of the campaign when the best title will be chosen!

Help us provide you more extra awesome content  - aka a new variant - for B Movies! This Social Stretch Goal unlocks when 500 new followers are added to any of our social media platforms combined. You can follow us on Facebook, Twitter, or Instagram; it's up to you. Each follower on a social media page counts as +1 follower to reach the social stretch goals.

MORE INFO ABOUT IT

The B Movies collaborative game is meant to be a fun activity where the players work together to create the most amazing B Movies scripts imaginable. It is only slightly competitive and to be played in good faith with fun as the only goal. Just decide on how many games you want to play before starting, and let the fun begin! 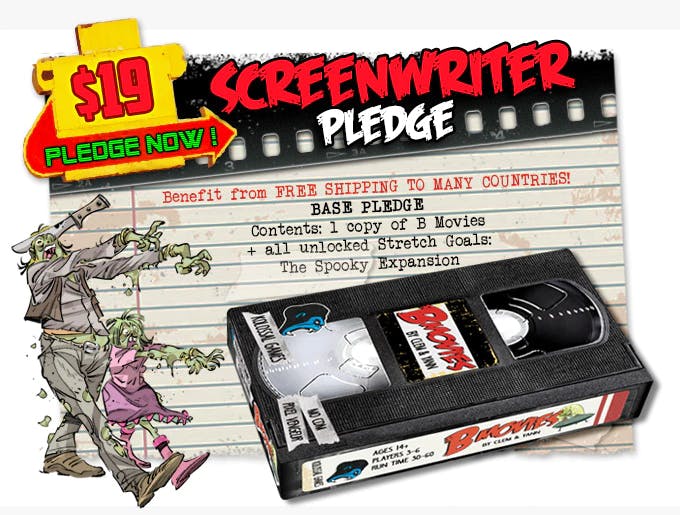 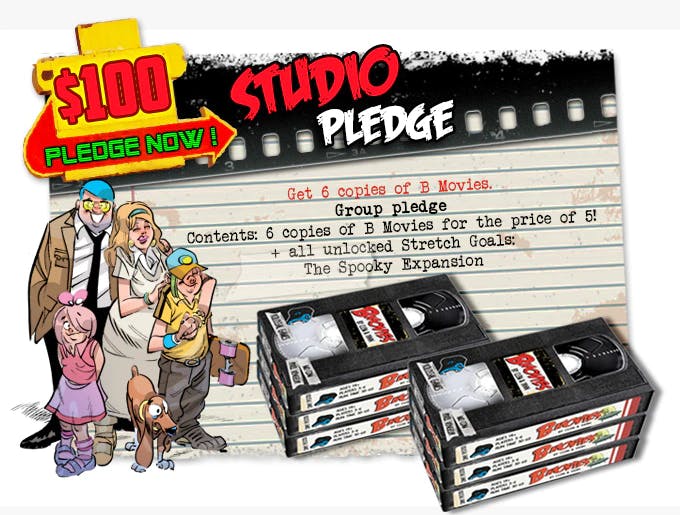 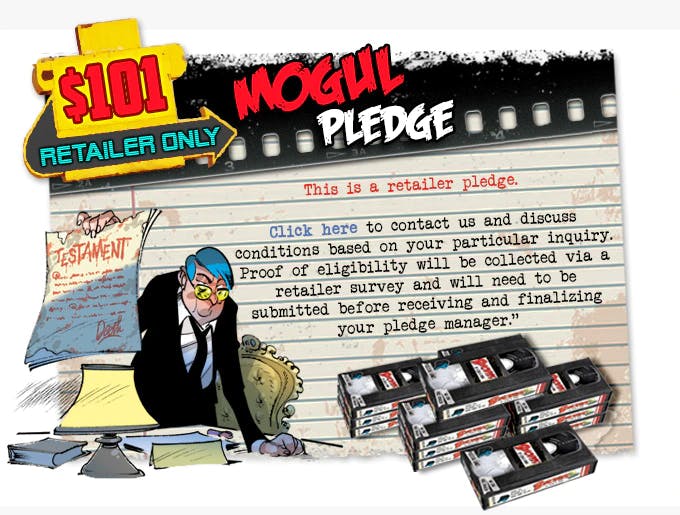 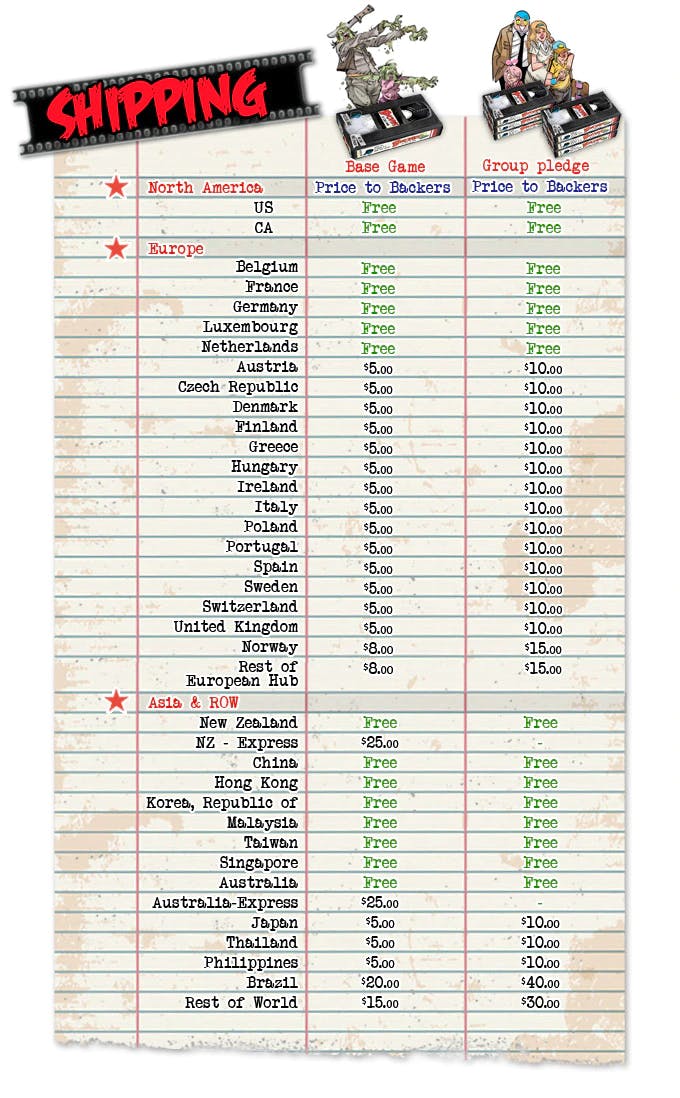 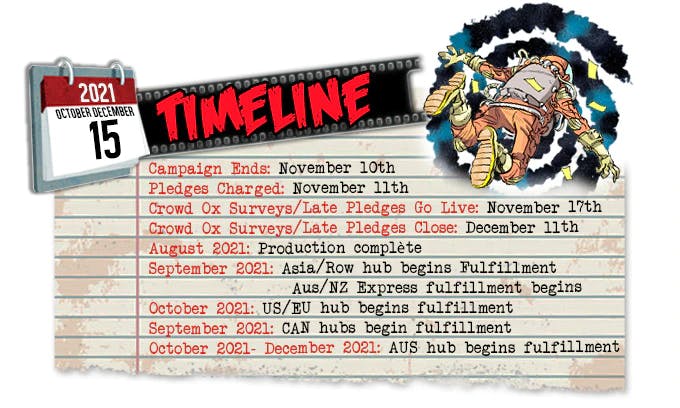 If you are keen on a written review, it's here, thanks to GeekDad.

Kolossal Games and Kickstarter: A Long Story Short B Movies is the 20th game launched by Kolossal Games on Kickstarter. As such, we are dedicated to continuing to bring unique and meaningful gaming experiences to people all around the world! #Successful Campaigns Kolossal Games has continued this record by successfully funding 19 games already, such as Western Legends, Mezo, and Terrors of London. #Production & Delivery Kolossal Games has a proven track record of successfully funding campaigns, and we have delivered several games already! However, sometimes there are unexpected issues despite our best efforts. In some cases, delays result from issues with the production process. We work very hard to make sure the correct components of the promised quality are included in all of our games. So when a component issue arises, we take action to correct it as quickly as we can. This occasionally results in us discovering a manufacturing issue very late in the process, which can delay delivery. Sometimes delays result from the development of the game itself. These may be an issue with the art, rules, or gameplay that we discover ourselves or are perhaps pointed by our backers. This is one of the best parts of crowdfunding because we have implemented more than one clever idea suggested by our backers. Lastly, delays sometimes occur during the delivery of the games themselves. It is a long and complex process of getting games from the factory to our backers, and so many things can happen along the way! #Communication For our global communication, we use many different channels, including our website, social media, and newsletter. For our Kickstarter projects, we mainly provide information through campaign updates. However, feel free to contact us through our website (kolossalgames.com) or ask questions on boardgamegeek.com. Additionally, we are active on Facebook, Instagram, and Twitter, so look us up on those platforms as well! During the campaign, we regularly update backers with information on the game, campaign progression, stretch goals unlocked, and stretch goals to come. We also use updates to provide answers when many backers have the same question. Following the campaign, we provide information on the next steps: files validation, production starting, components ready, production completion, games ready to be loaded on boats, arrival at the fulfillment centers, games being packed to be sent to backers. After backers have received their games, we remain available for comments and to answer questions. We are active in the BGG forums dedicated to our games. Additionally, our support center is always available, and we will answer your tickets HERE (http://support.kolossalgames.com/open.php). To know more about Kolossal Games vision: https://bit.ly/Kolossal-2020 #Refund policy We will gladly refund you if the request is made within 14 days of the end of the campaign. Following that time frame, any "no reward" pledges will not be refunded. All requests for a refund, if accepted by us, will be subject to a 10% cancellation fee, which represents the Kickstarter fees, our work, and payment processing fees. We will not process any refunds after production is complete. Please note that if you do not complete the pledge manager by our required deadline, you will not be eligible for a refund for any reason. The pledge manager will be open for sufficient time to complete it, and we will send several reminders as well. 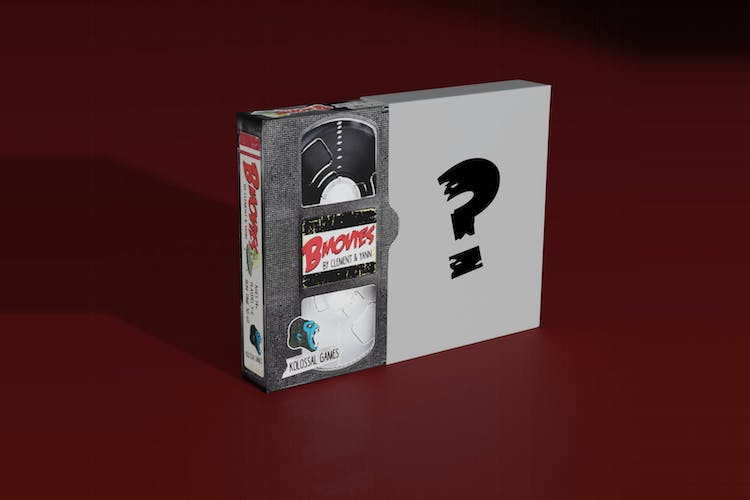 Benefit from FREE SHIPPING to many countries!Contents:- 1 copy of B Movies

This is a group pledgeGet 6 copies of B Movies (French) for the price of 5!

This is a group pledgeGet 6 copies of B Movies (English) for the price of 5!

Pledge $100
Did you miss or lose the link to complete your Survey? Retrieve it here