Welcome to the late backer page of Born Punk!

Missed our kickstarter campaign, but would still like to jump in early with all the rewards that the original backers got? You can! If you want to late-pledge on a higher Kickstarter tier than those listed on this page, please contact us directly. Cheers!

Born Punk is a point & click adventure! It's a cyberpunk adventure! It's science-fiction too! Now that the buzzwords are out of the way, let us explain this in a less sensational manner: Born Punk is a game in the style of the 80s and 90s point & click classics like Monkey Island, Gabriel Knight and Beneath A Steel Sky, that wants to deliver an intriguing storyline and logical, non-outlandish puzzles - which admittedly, were a bane of ye olden games.

We want to combine the best of both worlds, the old and the new: keep what made point & clicks great, and replace what made them tedious. Last but not least, Born Punk is a love letter to hope: even though cyberpunk traditionally is a dark and edgy genre, we firmly believe that most forms of popular sci-fi (and cyberpunk is definitely part of sci-fi!) delve too deeply into 'depressive territory'. Whilst we are here to tell a story about tragedy and strife, we also want to tell a story about how in the middle of despair and anguish, there's always an acorn (or even loads of them!) of hope to be found.

Actions (and gameplay demos) speak louder than a 1000 words! Please feel free to download our demo to test our game for yourself here.

Let us give you a bullet point list TL;DR of what we think makes Born Punk special, or rather, we think is noteworthy about our baby, before we delve deeper into the details:

The game follows Eevi Rinasdottir, a former corporate combat hacker. Eevi grew up in the bad parts of Bornholm - of which there are many in 2155 - and was forcefully recruited by a mega-corporation called Mitsotomo. One decade later, Eevi was forced to return to the place of her humble beginnings, to work as a barkeep for her foster father, and to dream of returning to the glittering corporate lifestyle she had grown used to.

In the game, we meet Eevi as she is suffering an ungodly hangover, trying to prepare for a nightly 'data drill', a freelance hack meant to extract enough critical data from random targets to finance her comeback. What she doesn't know is that an electronic entity has infected her cyberdeck (think brain-computer-implant). At least at first glance, this entity - likely a rogue AI - seems just as confused about the situation as Eevi is.

As the story advances, the player will seek answers about the nature of the intruder, either come to terms with it or try to expel it from her body, struggle with suffering from what is essentially a digital multiple personality disorder (imagine having a self-aware talking program forced into your brain! ... actually, that sounds kinda cool), and ultimately uncover a conspiracy that could change humanity's future forever.

As should be painfully obvious by now, the game is set on the island of Bornholm, which is a Danish territory IRL. By 2155 - the year the game takes place in - Bornholm has transformed from a quaint holiday getaway with some interesting history to a proper mega-city, governed by a corporate council called The Conglomerate. Most importantly, the island hosts a space elevator; a gigantic construct used to transport goods and people into orbit for a fraction of the cost traditional methods would be able to. This has made the formerly obscure region a hot spot of 22nd century geo-politics. 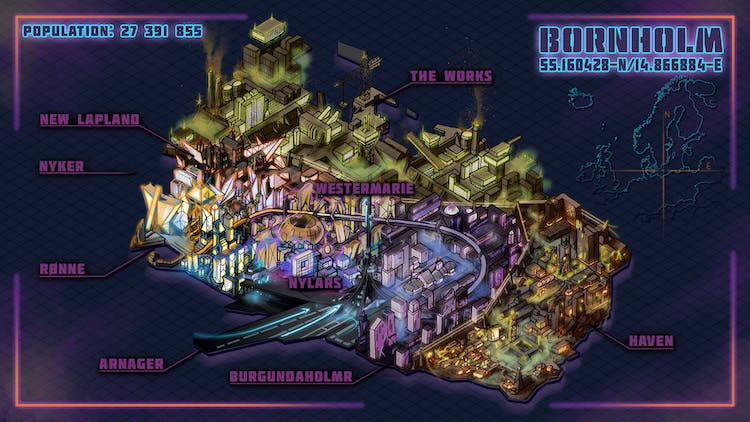 Born Punk will feature many intriguing, unique, dark and wacky characters alike. But there's a few who you will likely see a lot of: 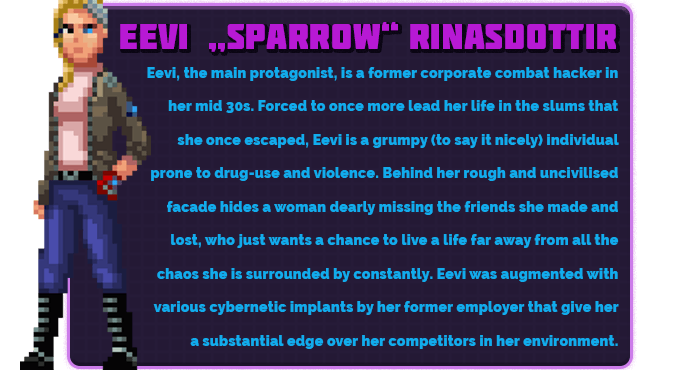 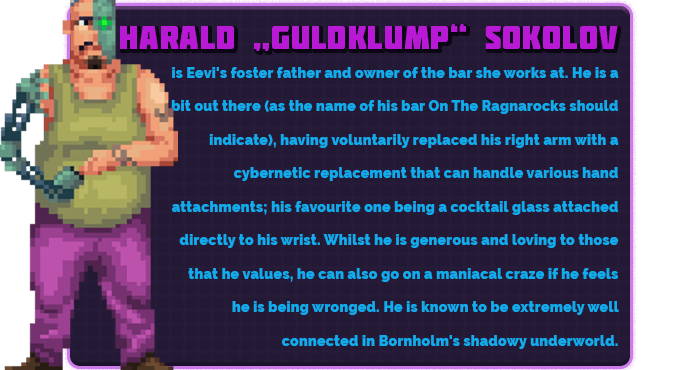 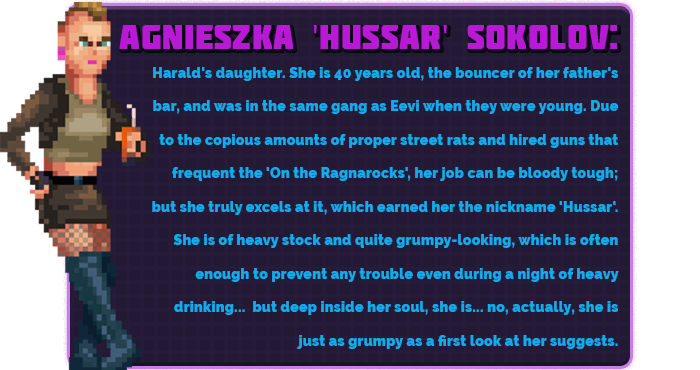 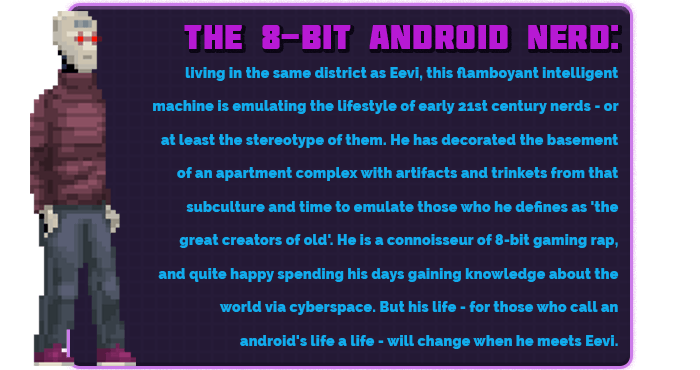 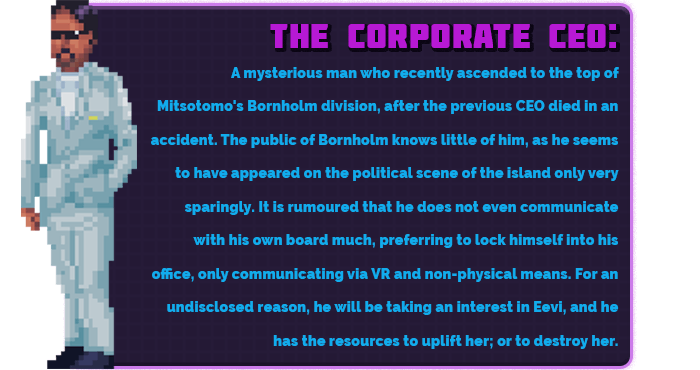 Aaaand a few designs of the kind of characters you can expect in the future:

The final amount of locations/scenes in the game will heavily depend on our kickstarter success, or lack thereof. Should things go as we want and hope they will go, there will be about 40 different scenes in the final version of Born Punk.

These scenes will include the bar 'On the Ragnarocks', various funky neon-coloured scenes in cyberspace itself, the seedy parts of town, the glittering streets of downtown Bornholm, a futuristic harbour, the local space elevator, and last but not least, one or more scenes in SPACE! You may not be as excited as the writer of this blurb, but come on, IT'S SPACE! It is not guaranteed though that you will see each and every one of these locations during one playthrough, as the decisions you make during gameplay may affect the storyline in a way that locks you out of certain progression paths. We do love us some choices and consequences!

Jeff Kurtenacker, composer of the bombastic soundtrack of the MMORPG Wildstar and former World of Warcraft choral arranger, is keen on delivering a VERY high quality soundtrack. I encourage you to check out his work on Wildstar here.

Apart from Jeff Kurtenacker, we have two professional musicians (Javier Morales and Greetings Program) working on atmospheric tracks that will be playing in the background, tailored to dynamically switch according to the situation at hand.

Born Punk will release on all viable platforms for this kind of game. The UI and controls are designed with a PC in mind, and will be adjusted to different platforms according to their limitations. To be concrete, the game will release on:

As so many things in regard to this production, our timeline depends entirely on our success on kickstarter. As the gameplay demo explains (please do play it if you haven't yet), we will finish the game no matter what, but I can't possibly give you any sort of precise timeline. In the case of everything going smoothly on this platform, we expect the game to be in development for 12 to 18 months.

ID22's lead is Falko. Falko has been a (PC) gamer ever since 1984. Sierra and LucasArts adventures were some of his most memorable experiences as a small child and teenager alike; memories that most definitely shaped his taste in games. In the late 90s, Falko developed a couple of freeware games, but was drawn into 'real life' too much to make a business out of that hobby.   Four years ago, Falko closed his business consultancy and translation business of 8 years, to move with (and for) his wife to Australia.

In the last 4 years, Falko has been producing gaming videos and streams professionally, but now it is time to move beyond merely playing and criticising games. As the film Ratatouille once said:

"In many ways, the work of a critic is easy. We risk very little yet enjoy a position over those who offer up their work and their selves to our judgement. We thrive on negative criticism, which is fun to write and to read. But the bitter truth we critics must face is that, in the grand scheme of things, the average piece of junk is more meaningful than our criticism designating it so." 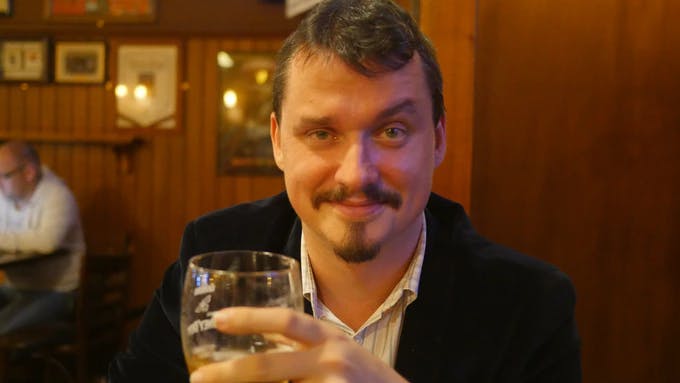 Falko is joined by Indrek, an enormously talented graphics artist from Estonia. Indrek is blessing Born Punk with his love for both point & clicks and pixel art alike. Previously having been a background artist for Blackwell Deception by WadjetEye Games, as well as an industry designer, Indrek is able to contribute not only with his raw creativity, but also by counseling Falko on the intricacies of game developer life that he has experienced. Indrek is responsible for all animations and background graphics. 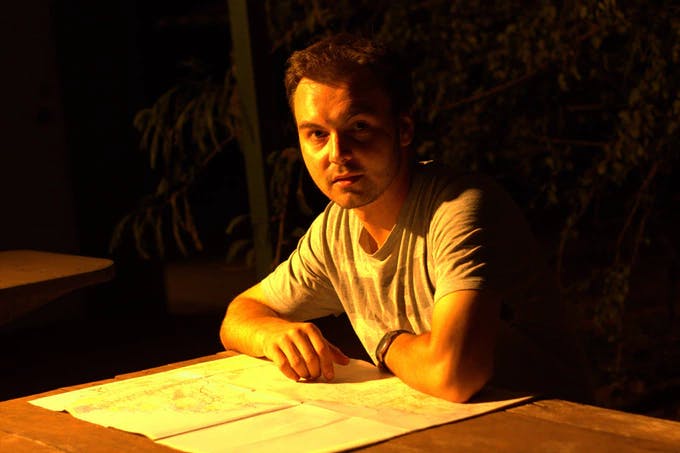 Jean Czerny, an architect and friend of Falko, is contributing concept art, maps and architectonic advice. He contributed to the movie Dwarves of Demrel as a concept artist and worked as an illustrator of card game Godforsaken Scavengers. 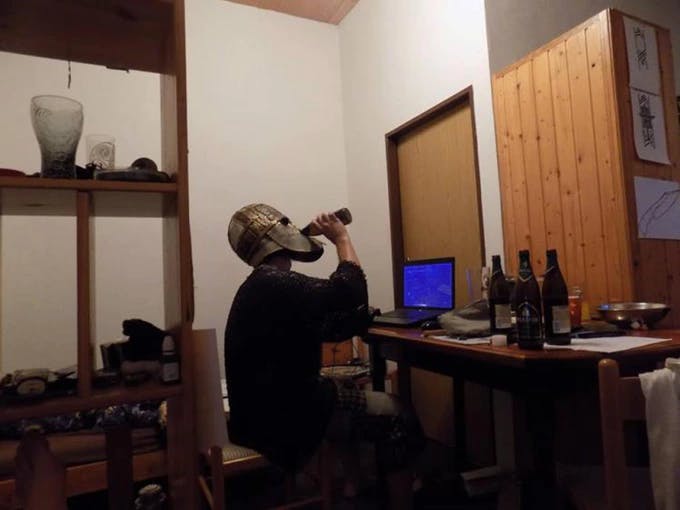 If you would like to stay up to date with the game development, you can follow us on the sites listed below. Please be aware that twitter and discord will be the main platform for public updates. 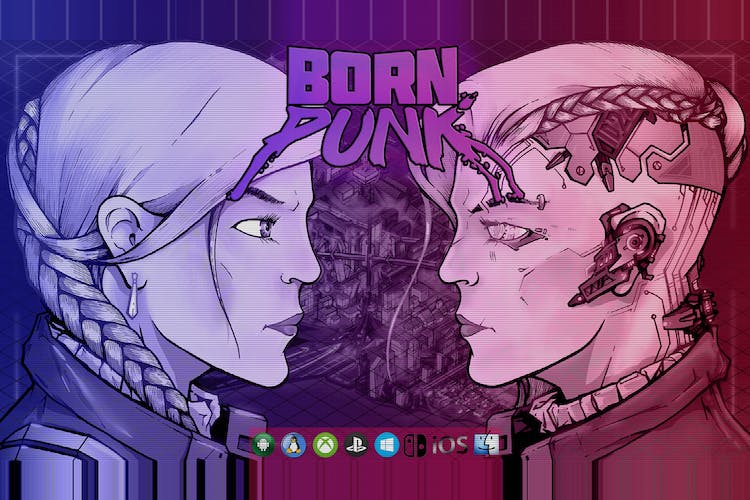 The majority of people in the Born Punk universe are from the lower classes - but as we all know, those are the people who (literally) build society! Just like these industrious people, you have chosen to help ID22 be industrious too.

This tier will net you a digital copy of Born Punk as soon as the game is finished, as well as the soundtrack DLC.

Lucky to be a Born Citizen, the astute and well-educated you has chosen to support the making of our game, but wisely demand some acknowledgement and compensation in return!

Pledging on this level will give you a second copy of Born Punk once the game comes out, as well as the game's concept art and soundtrack DLC. Most importantly, to honour you fine citizen, you shall be immortalised in the game's credits!

Pledge $30 AUD
Did you miss or lose the link to complete your Survey? Retrieve it here