Cultistorm is the expression of our respect and love for H. P. Lovecraft. It is more than just an ordinary board game – this is a Lovecraftian gaming experience with literary and musical dimensions. Our theme choice was motivated by a deep commitment to the work and heritage of H. P. Lovecraft. 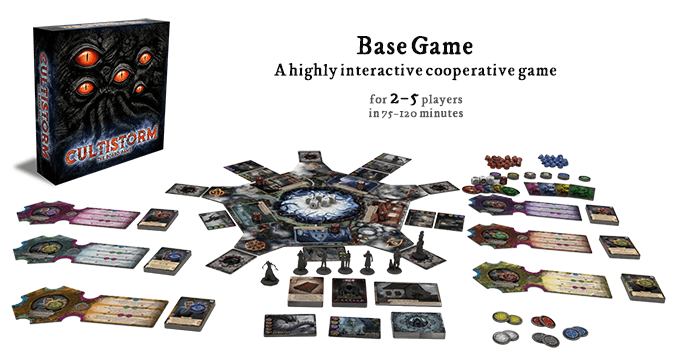 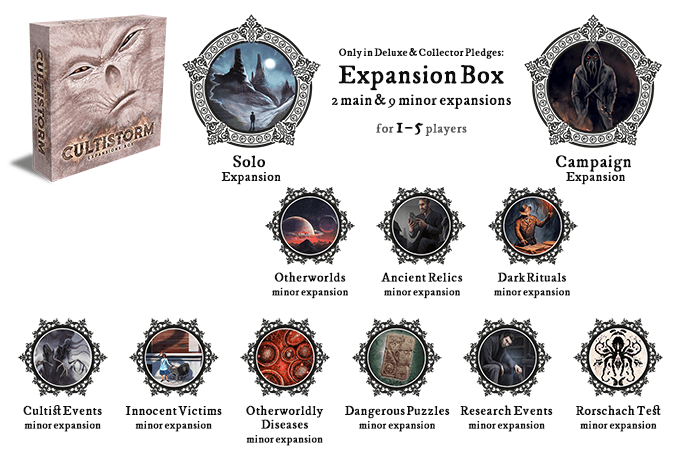 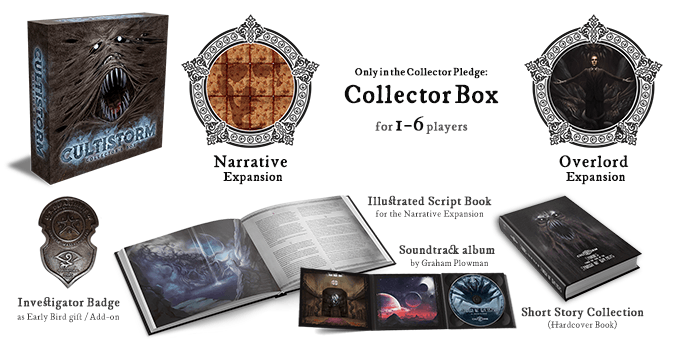 We have devised an efficient way to enhance your immersion in the Lovecraftian atmosphere of Cultistorm: we bring you a Script Book with 500+ flash fiction stories from the weird fiction genre. Every character and location (whether from this world or another), the investigators, the cultist sects, and the different events all get their own stories. You can also read a story before an encounter with a cultist – not only will this intensify your gaming experience, it can also have a direct effect on the encounter. The narrative gameplay with the Script Book makes Cultistorm a deep and truly story-driven adventure.

The Script Book will come as a beautiful hardcover book with full-page colour illustrations.

We want to make the game as immersive as possible. Instead of adding flavour texts to cards, we are compiling short stories with the help of a team of talented weird fiction writers. To accompany the game we offer a complete volume of short stories, which is worthy of Lovecraft’s literary heritage and the genre requirements he created. The short stories are directly connected to the different casts of cultists, locations, and Great Old Ones appearing in the game, creating a detailed world and a rich backstory on a scale quite unusual in the realm of board games.

If you feel like listening to some music while reading or playing, you can turn on Graham Plowman’s album, which he created especially for Cultistorm. Graham is perhaps the most acknowledged composer of the Lovecraftian subculture. He creates his Lovecraftian atmosphere with a mixture of symphonic orchestra and choir music, using instruments from Lovecraft’s own time. His music is powerful, authentic, and of incredibly high quality.

Before you continue to read this page, why not listen to the track below? Turn up the volume and let Graham Plowman’s fantastic music transport you into the universe of Cultistorm… 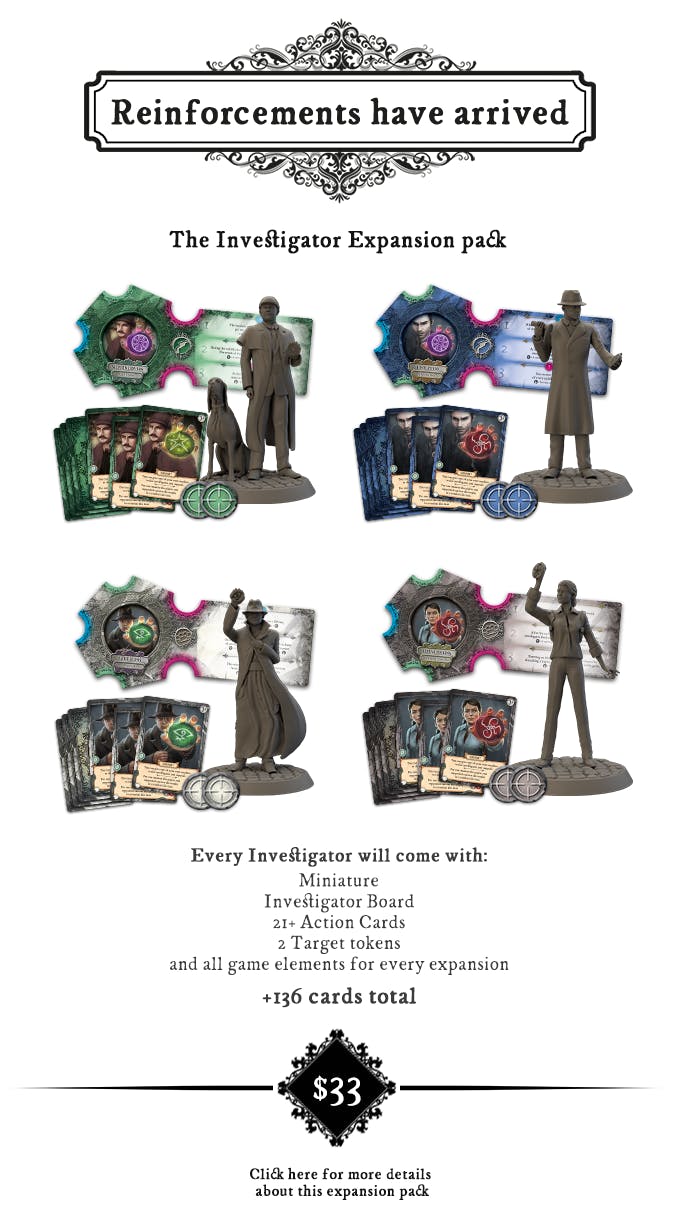 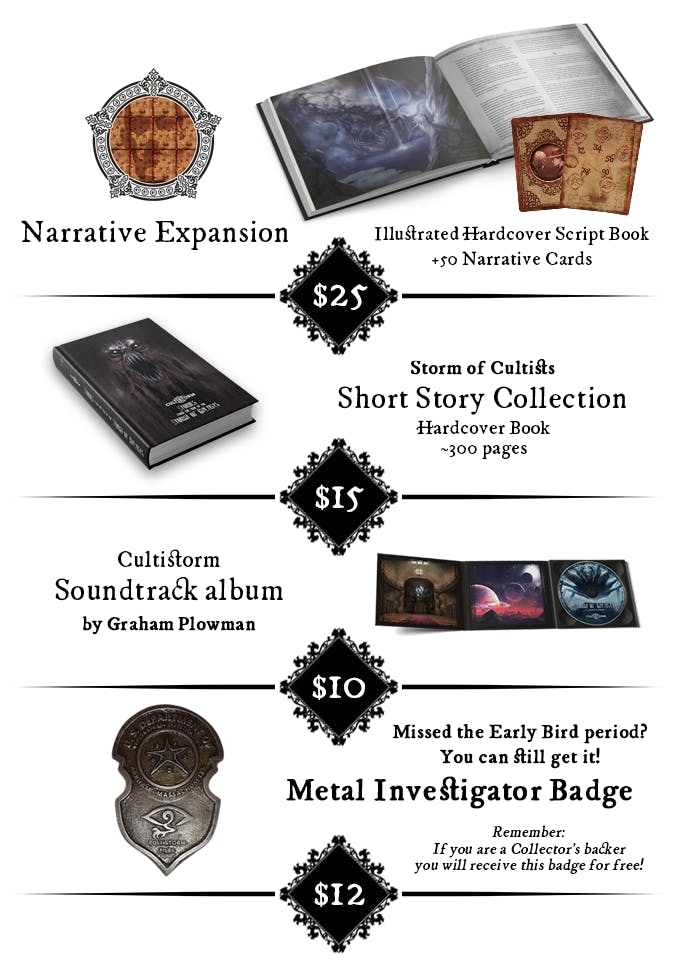 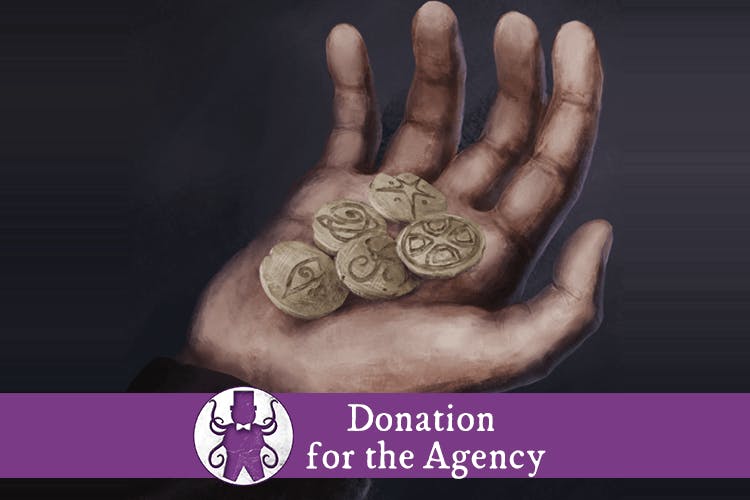 Donation for the Agency

There are various reasons, why you cannot invest bigger amounts of money into our project. Maybe you are not into board games, maybe you just have financially hard times currently... so many reasons...
But maybe you still want to help us and the Cultistorm project out a little bit. With this Donation, you can contribute to our project. Every little bit is most welcomed and highly appreciated.
This project came alive thanks to the brave investigators, supporters and friends. Come and join this awesome community and become part of our journey in creating Cultistorm. 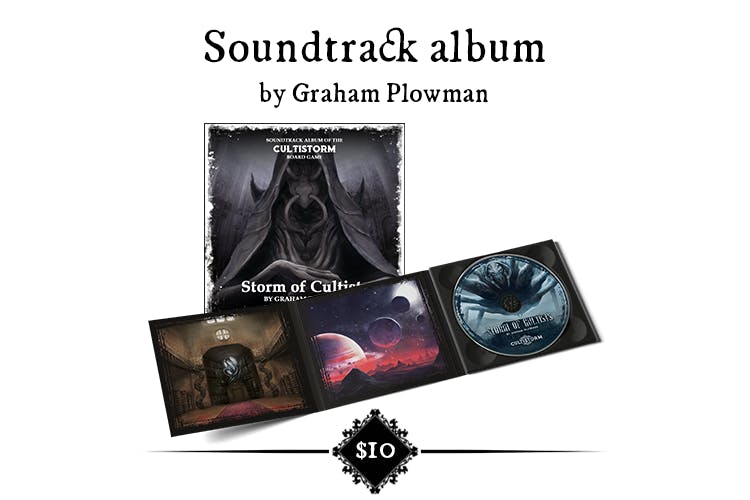 Storm of Cultists: A Soundtrack album by Graham Plowman

A music album composed by Graham Plowman to get you in that special Lovecraftian mood.

If you want to find out a little bit more about the music and Graham Plowman, please check out these links:

Storm of Cultists: A Soundtrack album by Graham Plowman (digital)

A music album composed by Graham Plowman to get you in that special Lovecraftian mood.

If you want to find out a little bit more about the music and Graham Plowman, please check out these links: 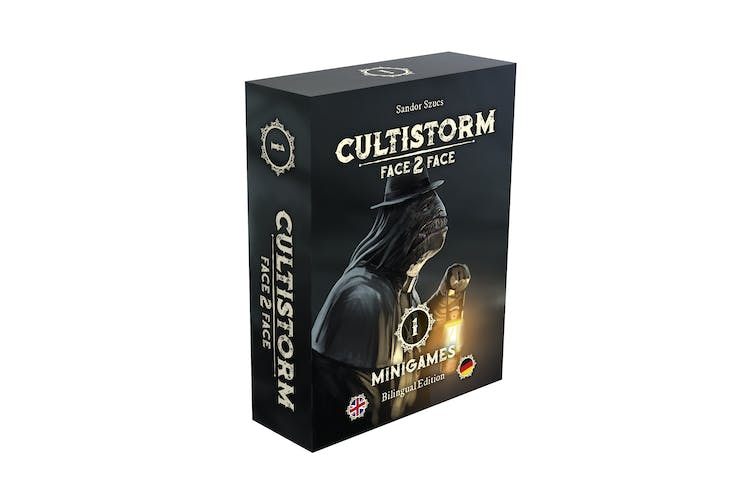 This is a 2-player deduction game specifically designed for Essen Spiel ’19. It has a play time of 10-15 minutes. In this game, an Investigator and a Cultist have to face each other. The goal of the Cultist is to use his intuition to summon his dark master, whereas the Investigator has to rely on his deduction skills to stop the Great Old One from entering the game. Face-2-Face is a fast-paced game with a good flow.

We highly recommend switching roles after the first game to experience how it feels to be in the shoes of your opponent. 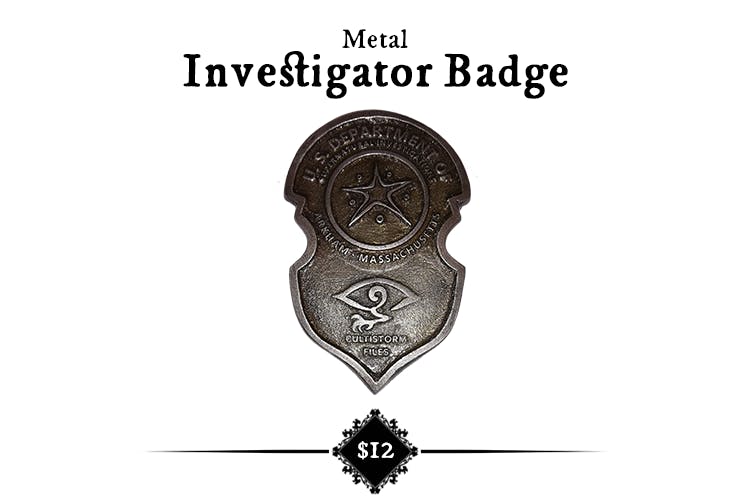 You will receive a very cool metal investigator badge to prove your credentials to everyone who is foolish enough to question you. 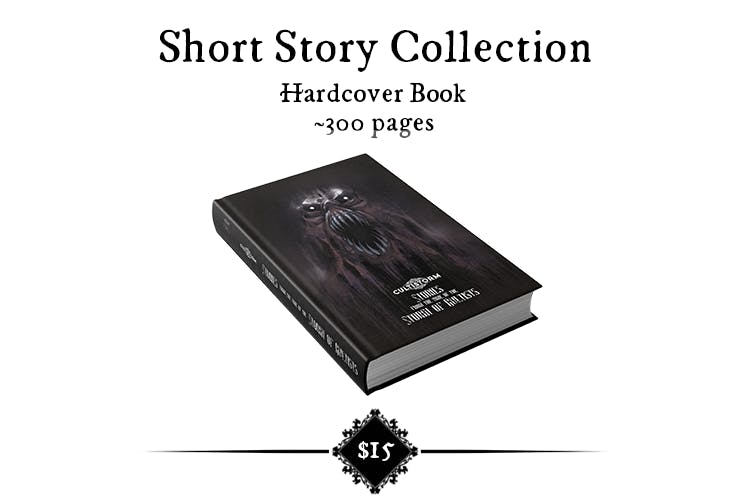 We put together an amazing team of award winning authors to write short stories for our game. They put their heart and soul (and probably all their remaining sanity) into this book. We wanted to go beyond the limitations of a board game and create a comletely new world for our game with its own background and stories. We wanted to pay respect to H.P. Lovecraft and this was the result. To read some samples of the stories, please click here. We really hope you will like it.

This add-on includes a Hardcover book with over 300 pages of professionally written Short Stories. 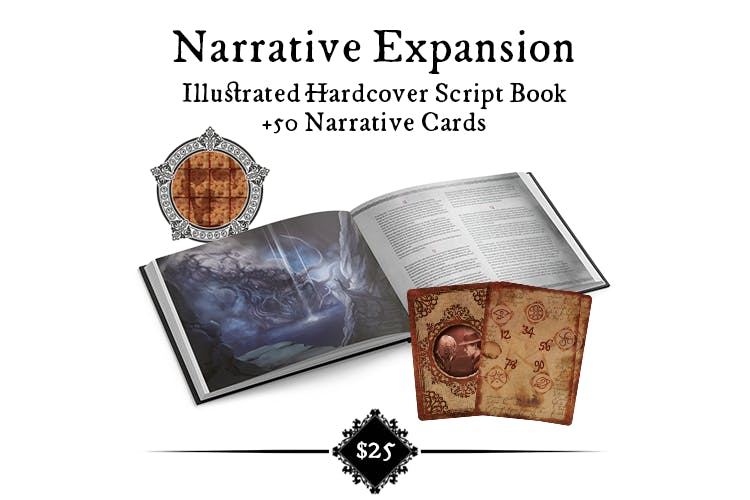 With this expansion you can immerse yourself  in the world we have created for you. It gives a whole new mechanic and a lot more flavor for the game. If you wish to find out more about how it works. click here

This Add-on contains the following Items: 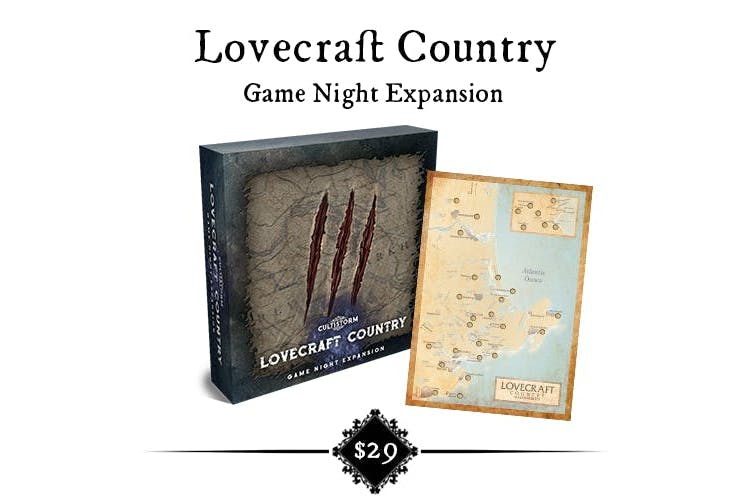 This Add-on includes and innovative expansion, that has been specially designed for board gaming events, game nights and gaming clubs.

With this expansion, up to 30 players can play at 2-6 tables simultaneously. Teams not only face their own challenges, but also affect each other's game while saving the residents of Lovecraft Country. If you want to find out more about it, click here. 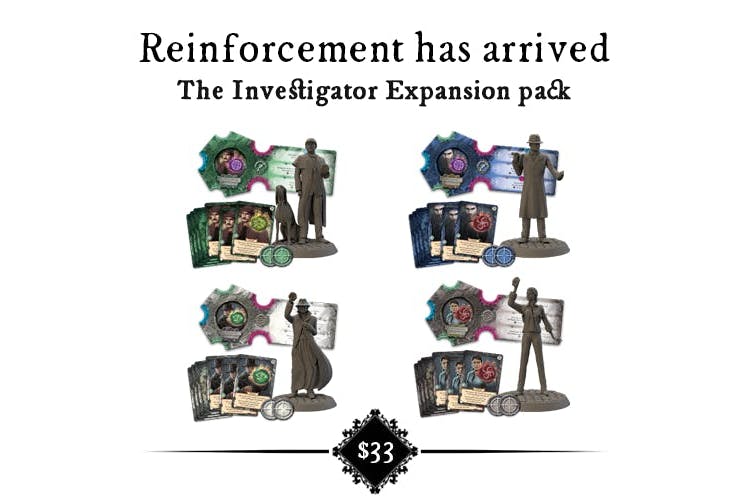 This is an expansion pack for Cultistorm. 4 new investigators join the Agency to help you uncover the dark secrets of the Cultists.  All the characters are completely usable in all versions of the game. To find out more about them, click here.

This Add-on package includes the following: 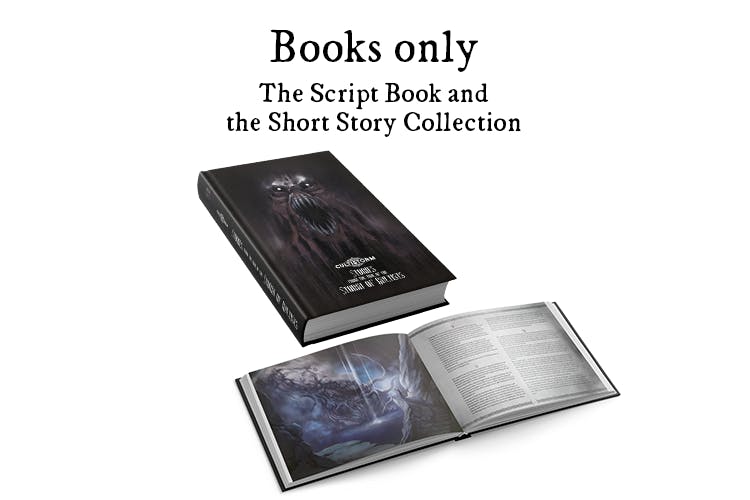 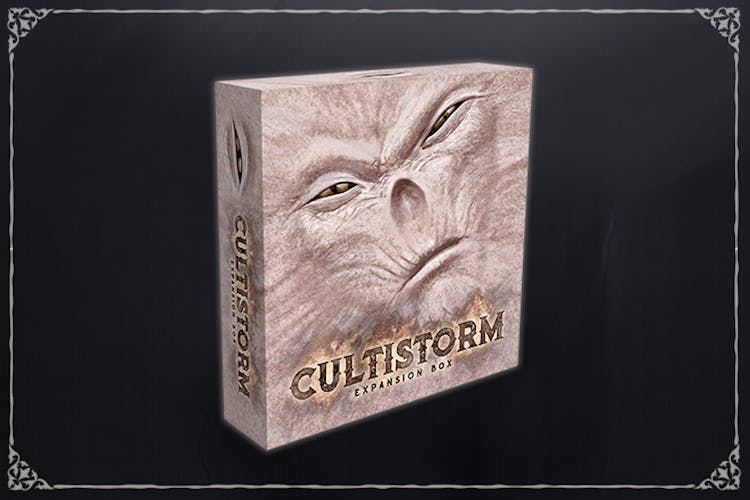 Deluxe Box Only (without Base Game)

Deluxe Pledge - WITHOUT  the Base Game. Choice this add-on, if you have already purchased a Base Game,  and you want to upgrade to get all the extra content of the Deluxe Pledge.  Important: this box is not playable without the Base Game!

This package is for those people who already own the Base Game and want to only get the content of the Deluxe Box.

Rulebook for the Expansions

It also includes ALL UNLOCKED STRETCH GOALS unlocked for this pledge Level! 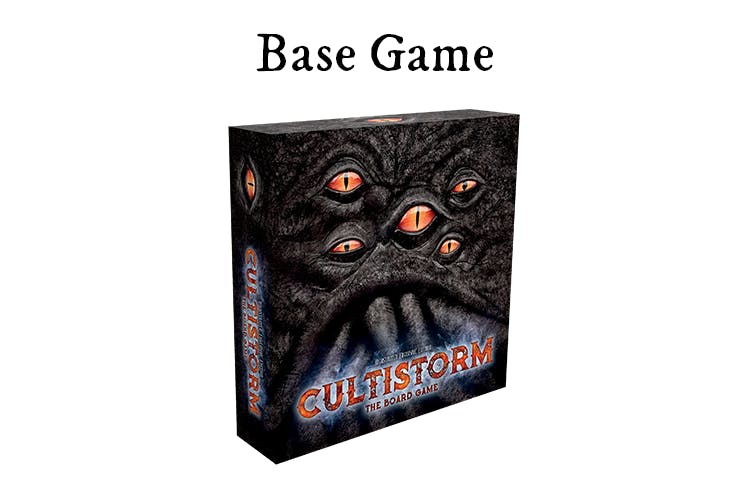 It also includes ALL UNLOCKED STRETCH GOALS unlocked for this pledge Level!

It also includes the exclusive Promos:

If you want to have a detailed description of all the elements, with pictures, please visit https://cultistorm.com/what-is-in-the-box/ 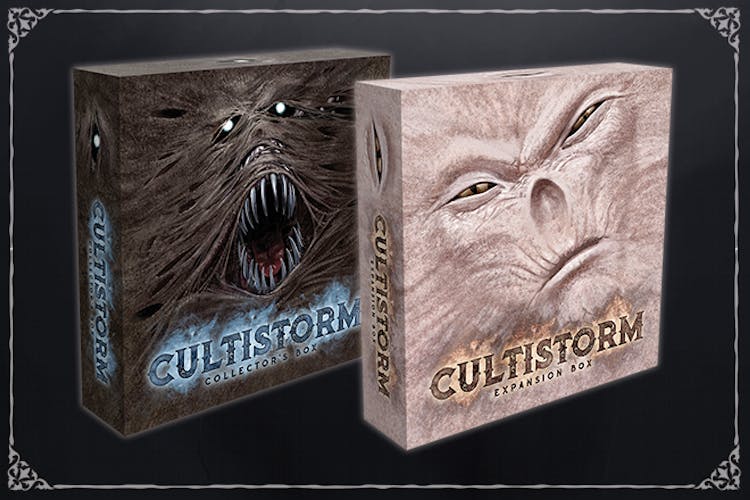 Collector+Deluxe only (Without Base Game)

This configuration is for those, who already own the Base Game and want to get only the contents of Deluxe Box+ Collector Box 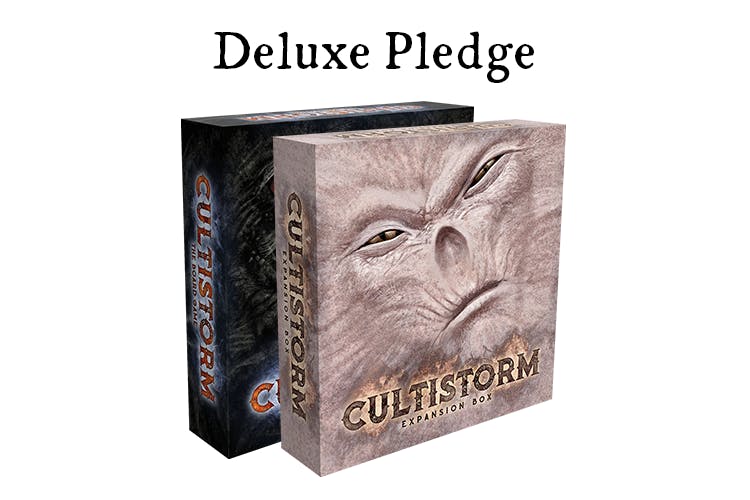 All elements of the Cultistorm: Base Game Pledge level

All elements of the Cultistorm: Deluxe Pledge level: 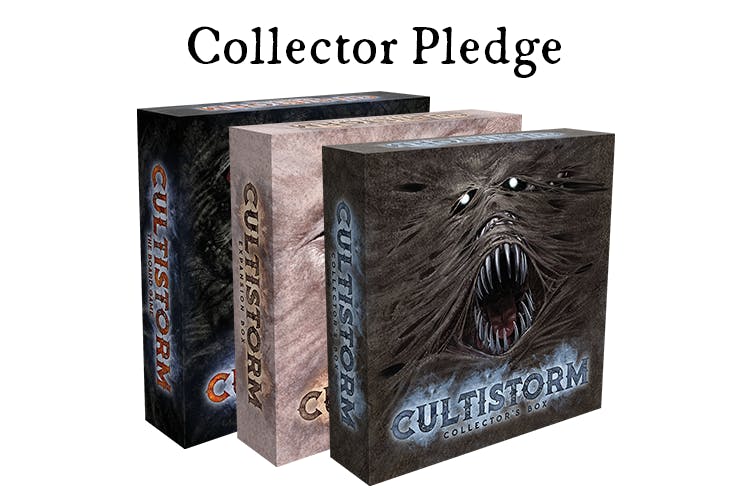 All elements of the Cultistorm: Base Game Pledge level

All elements of the Cultistorm: Deluxe Pledge level:

Does NOT include:
Reinforcements have arrived: Investigator Expansion pack
Lovecraft Country : Game Night Expansion (you need minimum 2 copies of the games to use this expansion) 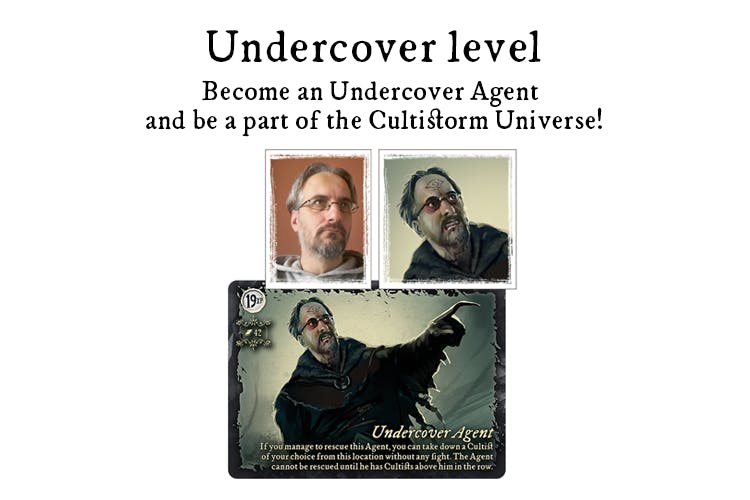 We would like to offer a very special opportunity for the most dedicated of Investigators: joining one of the most dangerous operations of the Agency and fighting as an undercover agent within the ranks of the Cultists.

You can join this mission by pledging for the special “Undercover Agent Pledge” – but places are limited!

The first 13 brave fighters will have the chance to join the ranks of the undercover agents. We will require mugshots from the participants, to be illustrated by our graphic designers. In this way you can become part of the Cultistorm universe via the 13 undercover Investigator cards. The aim of this pledge is straightforward: we want to allow our fans and backers to support us to a bigger extent via this pledge.

What you get with this pledge:

Pledge $750
Did you miss or lose the link to complete your Survey? Retrieve it here