S.A.L.E.M. is an animated story filled with adventure, slice of life, self discovery, and pancakes. This story follows a young, bright-eyed cryptid named Salem, who lives with their guardian, the infamous Boogeyman. For years they'd prepared to 'take over the family business', only for their world to flip upside down when the truth is revealed.

Wishing to discover their origin, Salem sets off with the aid of an enchanted book to discover their true self. Along the way, Salem is joined by the help of a wanna-be cryptid photographer named Oliver, and a psychic medium terrified of ghosts named Petra. With magical aid and plenty of energy drinks, the trio embark on a monster hunt.

What is a cryptid? A cryptid is classified as plants and animals that are not recognized by the scientific community or thought to be extinct.  Some of these creatures have origins and alleged sightings that span across the veins of history, with their presence shrouded in myths and legend.

S.A.L.E.M. is the creation of Samantha Sawyer (Sincerely Sam), a full time illustrator who envisioned this crazy project nearly SIX YEARS AGO! In November of 2018, Sam decided it was finally time to begin bringing S.A.L.E.M. to life!

After exploring the options of working with a network on the project, we deemed that in order to keep SALEM true to its story, we had to start it ourselves.

So here we are!! Ready and eager to start weaving this story of magic and mayhem - however. Animation is expensive, and we know we can't do this without the help of all you fabulous people.

In order to give the quality and story that the series (and you, the fans) deserve, we wanted to have you help us make this dream a reality!

S.A.L.E.M. (the Secret Archives of Legends, Enchantments, and Monsters) takes place in a small province nestled deep in the woods of West Virginia called "Hollow Watch". Known for its paranormal and cryptic phenomena, it's a hot spot for all things unknown. Hollow Watch rests right along a dense forest that has long been rumored to be home to mysterious creatures.

After discovering they were adopted, Salem must set out to find who they really are... or... What they really are. With the help of a wise enchanted book, and a couple of unbelievable friends, the journey ahead seems more exciting than ever!

Salem spent their young life living as the ward of the Boogeyman, which came with quite a few perks. Lost toys littered the halls of their home and they had plenty of hobgoblin minions to play with. Everything was great until Salem realized that, unlike they're father, they weren't a boogeyman at all. In a desperate search to find the truth, Salem makes a pact with an enchanted book called The Cryptorium to start an adventure into the unknown. Amidst the chaos of their search, Salem meets Oliver and Petra.

Oliver is a self-studied cryptozoologist and photographer. After meeting Salem, he couldn’t resist the call to adventure! Excitable, adventurous, and always along for the ride, Oliver typically goes along with whatever plan that Salem cooks up.

Petra holds about 80% of the trio's impulse control. Her realistic attitude helps balance the chaotic group. Coupled with her inherited psychic abilities, she's truly a force to be reckoned with. However, her powers are sometimes stifled by her intense fear of ghosts.

The Cryptorium is an enchanted book that holds the information of every cryptid species... except for Salem... The grouchy ancient tome can be a bit of a stick in the mud and generally likes to do things by the book.

And there are more friends to come! Throughout the series, the group of adventurers will meet a wide array of creatures and cryptids alike. 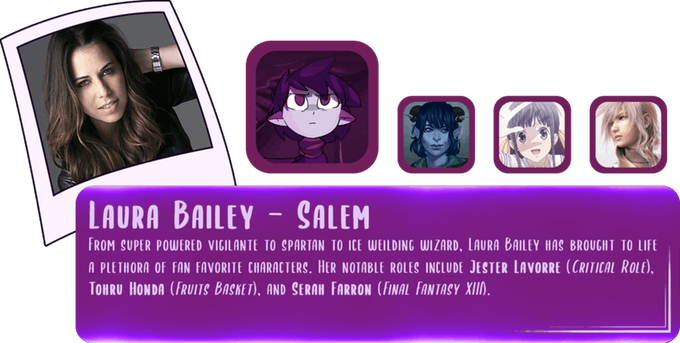 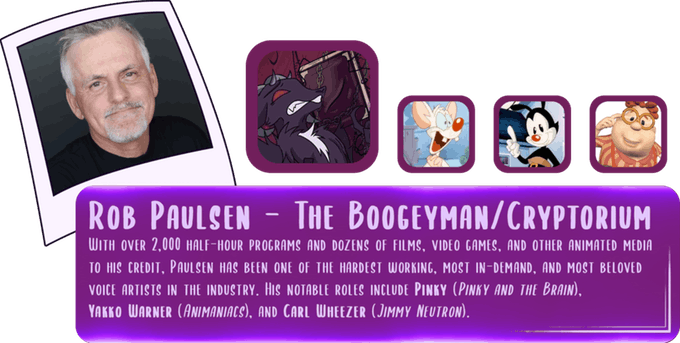 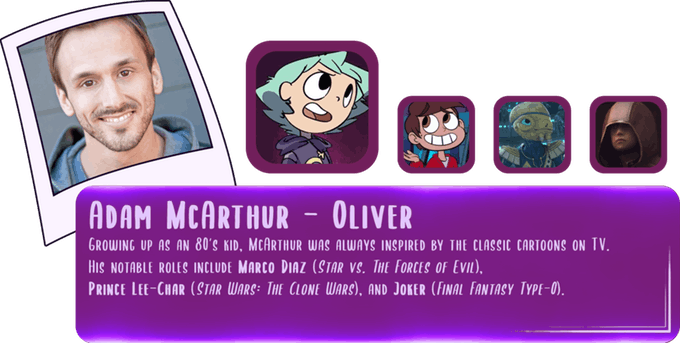 And these are just a few of our actors. We have quite a few plans to bring in other voice actors as well! With so many cryptids, there's going to be quite a few voices!

After pitching to a few networks and getting stuck in the waiting game we decided that it was best to do this ourselves. Rather than leaving everyone waiting, it was time to jump into action! Our kickstarter goal is $60,000 for our first 11 minute episode. We felt that going the kickstarter route would allow us to produce content and bring the story to life the best and most true way possible.

The ultimate goal is for this series to be TV-grade quality with 2D animation. We want to deliver a show that not only tells the story with its voices and writing, but the art and animation as well.

With the help of our amazing Executive Producer, Randy Abrams, and the guidance of Collaborator Swampy Marsh, we know exactly what it takes to create an animated series. With this experience and knowledge under our belt, we understand the budget and costs.  To remain open and transparent about the cost of creating this series, we have listed below a small chart to show you where the funds will go!

ALL of the funds from this project are going directly into the production of this series. The animation portion of the budget includes: Voice acting, storyboards, background art, layouts, animatics, clean up, sound design, and much more. All of the funds will be going into paying the talent, the artists, the writers, the animators, etc. We want to put everything we can into creating this series and getting it out there for all of you to enjoy! 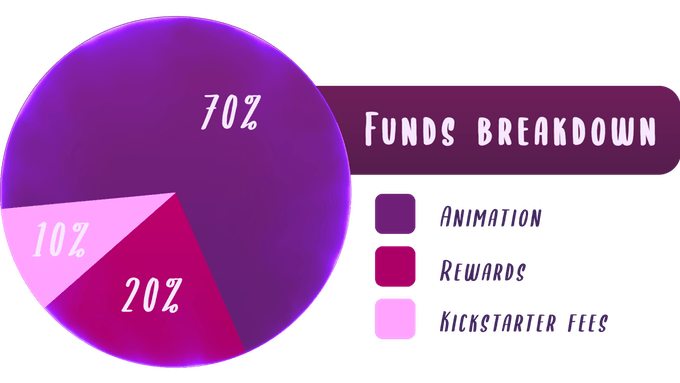 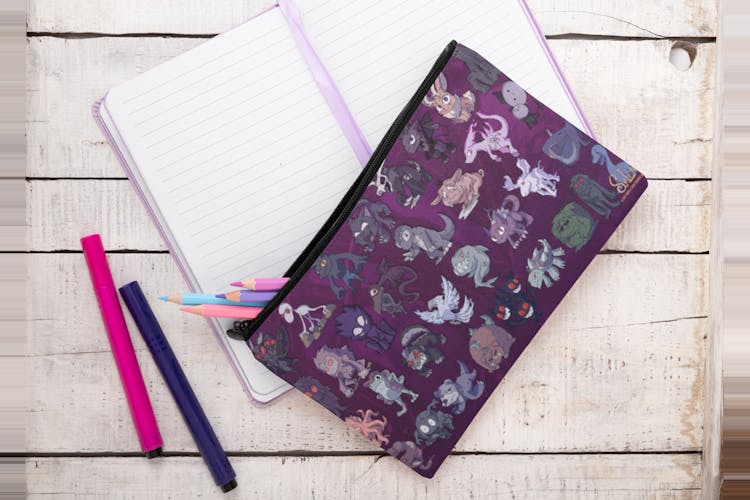 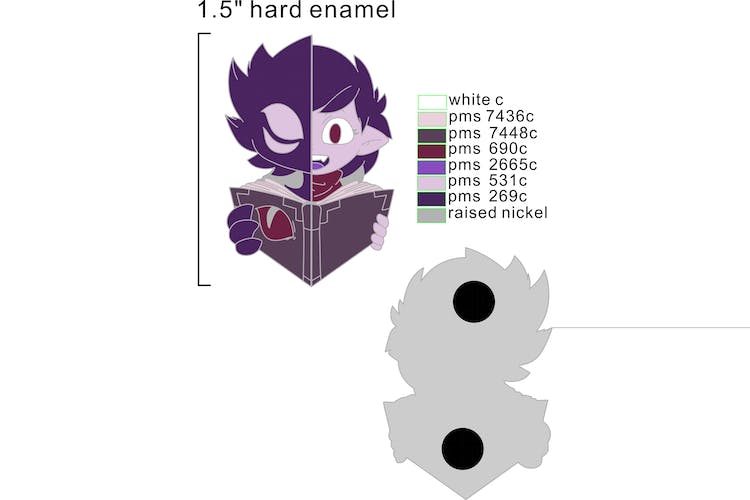 The Salem Enamel pin! This pin is 1.75" tall hard enamel. It comes with two backs + backings for extra stability. 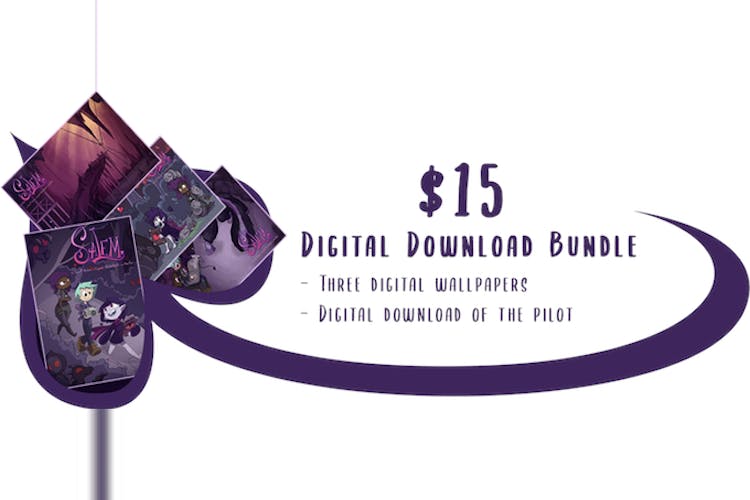 Do you like all the digital goodies that get sent right to your email? Well look no further!With this reward you'll get THREE digital wallpapers perfect for your desktop, along with a download of the series!
Pre-Order $15 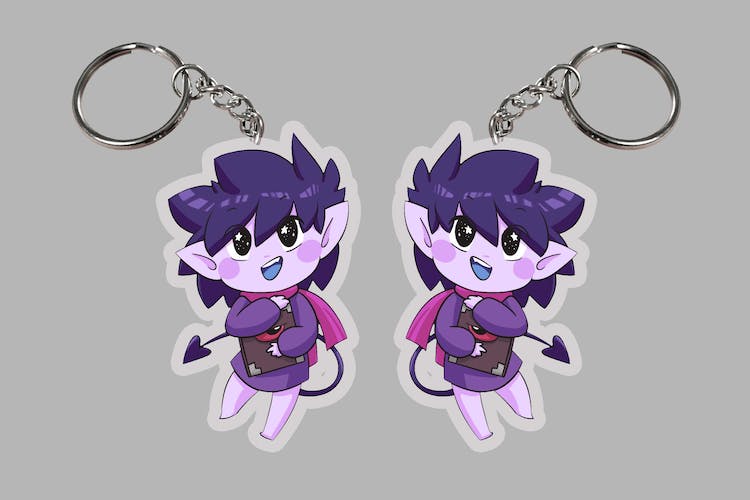 A super adorable 2" acrylic keychain of our leading character Salem! This keychain will be double sided and feature a ring style keychain! Perfect for backpacks, lanyards, etc! 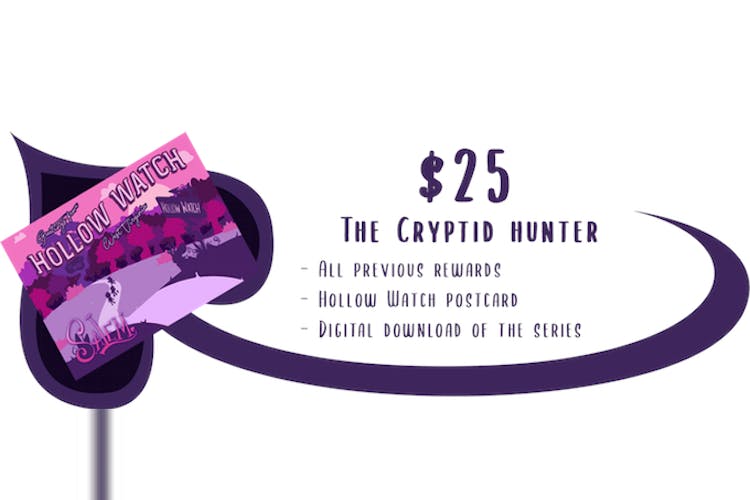 A thank you post card from the Salem series mailed right to you, as a personal thank you for helping us make this happen, including all of the digital goodies as well!
Pre-Order $25 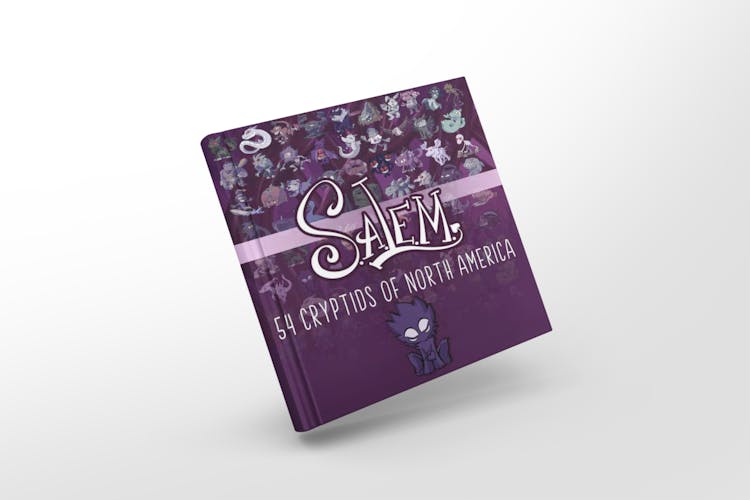 A softbound book that features 54 cryptids found in North America! There will be information on each cryptid as well as full color artwork of them as well! 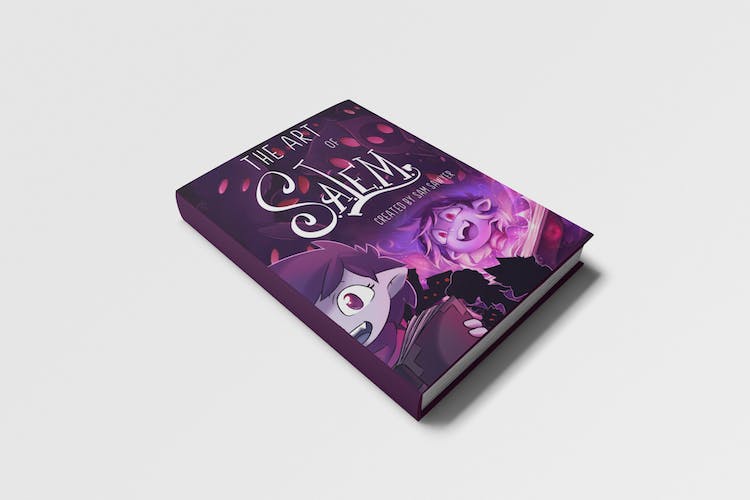 A hardcover art book that will feature all of the art and concepts that went into the creation of Salem! This book will feature character concepts, background art, and much more! 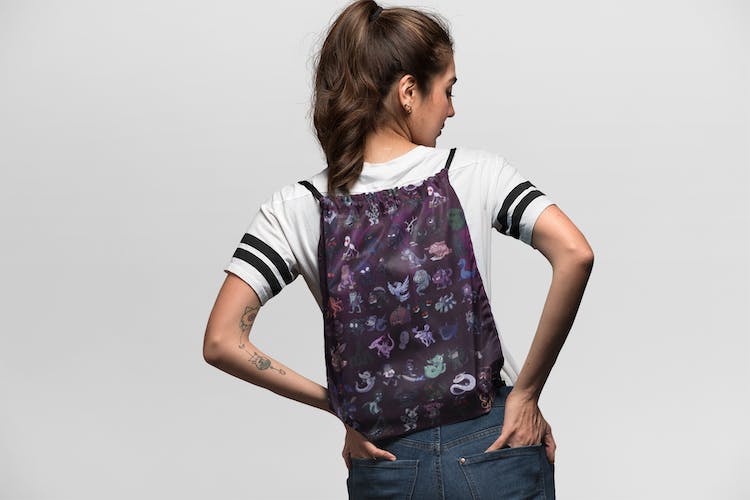 A super cute and super durable drawstring backpack! This backpack is made with a heavy duty material to keep all your cryptid hunting gear safe and sound! Perfect for school, on the go, and so many more adventures! 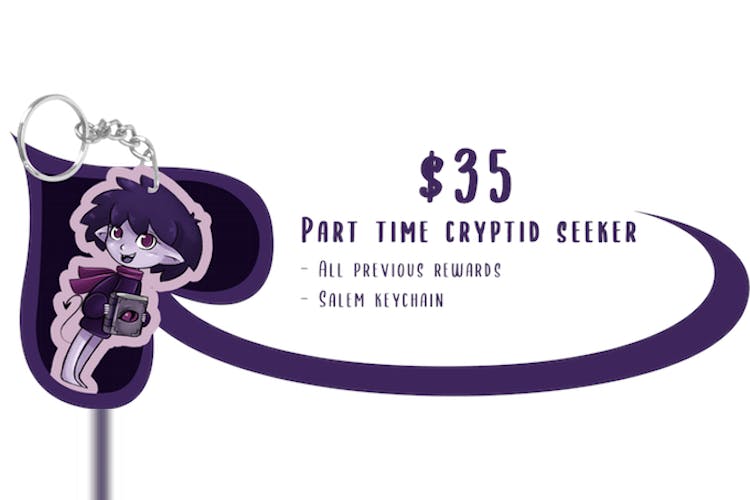 On top of the postcard mailed to you, you will also get an exclusive acrylic keychain as well! 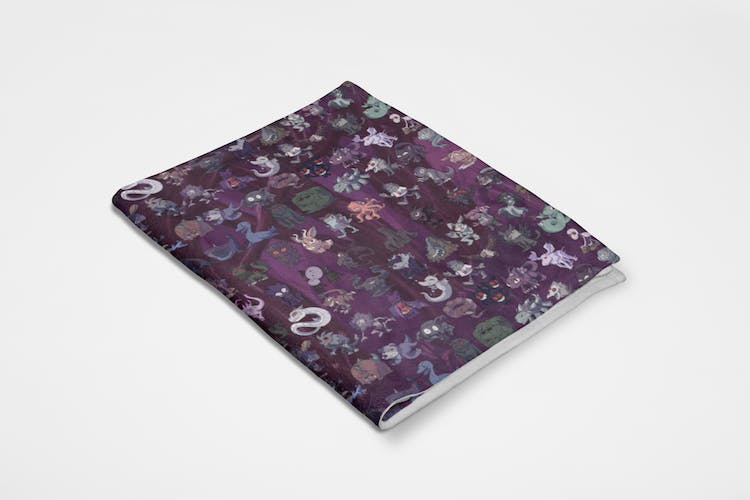 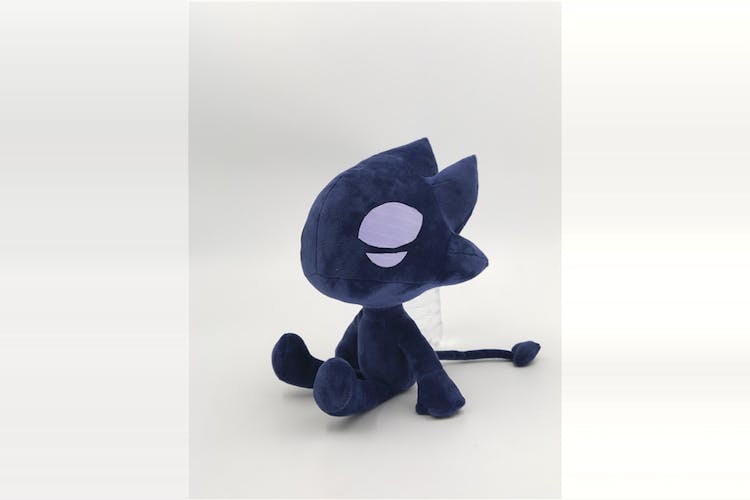 A super adorable Salem plush perfect for hunting cryptids! This plush sits at 12" tall and made of super soft plush material! 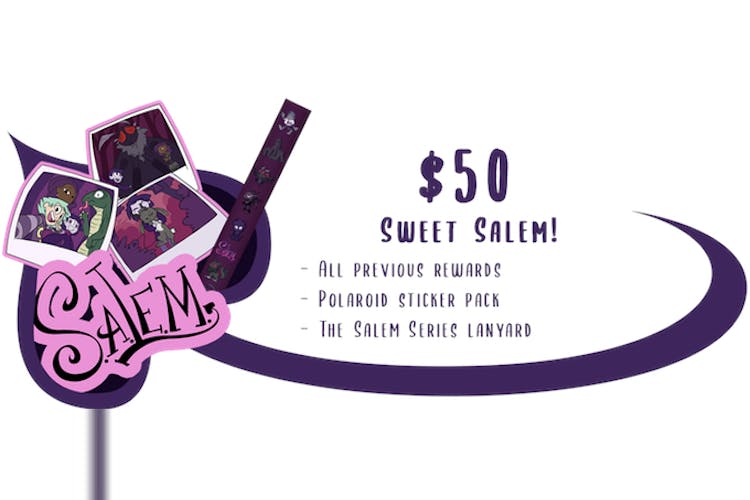 On top of everything from the previous rewards, you will also get a bunch of other goodies listed below!This is a huge thank you from all of us!
Pre-Order $50 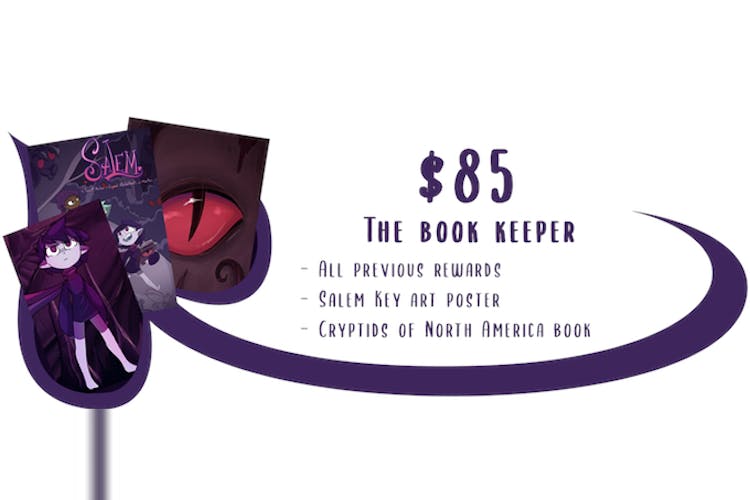 You're a rockstar! You will receive all previous tier rewards. This reward includes the addition of the 'Cryptids of North America' Art book! The book features 54 American cryptids and cool factoids about them. Thanks for being awesome! 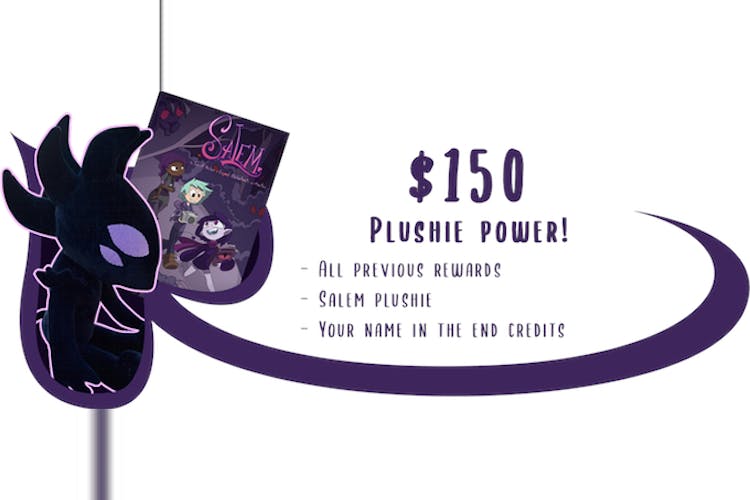 You're incredible, I know Petra would even say so! With this tier we introduce the Salem plushie! A soft adorable little cryptid to go with you on any cryptid hunt! With this tier, you will receive all previous tier rewards in the $85 category!At this reward level you will also get your name in the official ending crawl credits of the series! 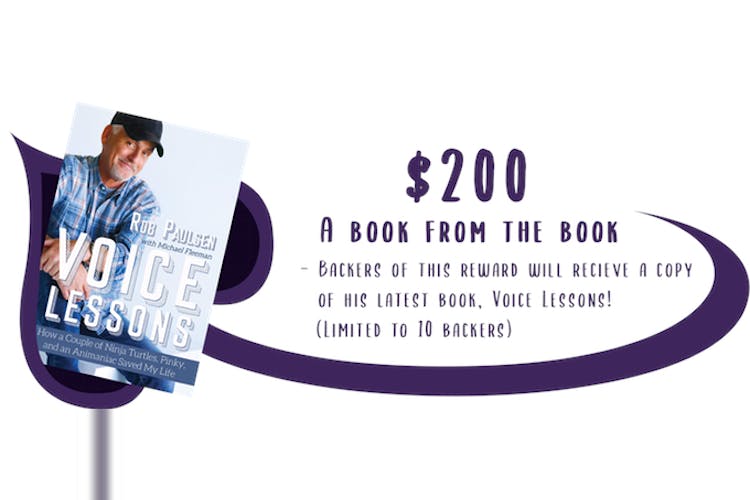 A Book from the Book

A book from a book! Our amazing voice actor Rob Paulsen has offered up copies of his new book: “Voice lessons!” This haul includes some awesome Salem swag as well!
Pre-Order $200 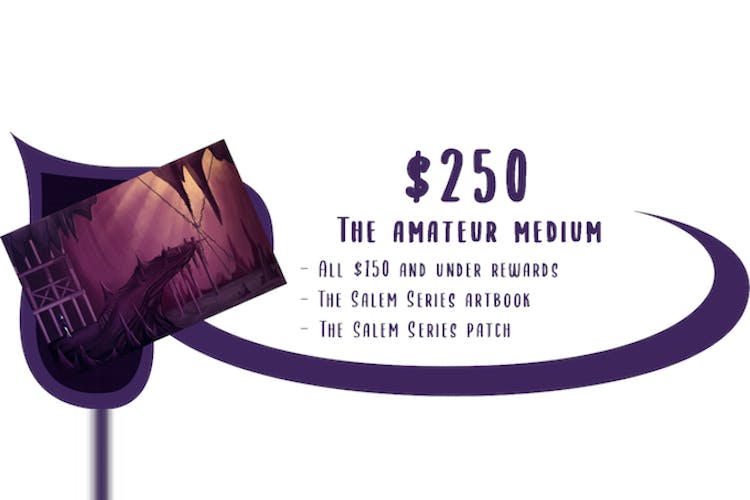 Ask Petra and she'll tell you, all the ghosts are jealous of this reward! You're amazing!With this tier you’ll get the exclusive SALEM patch! Perfect for any jacket, backpack, or more! As an added bonus, we're adding a copy of 'The Making of Salem Art Book', signed by the creator, Sam!Including all rewards in the $150 tier! (Excluding Rob Paulsen’s book) 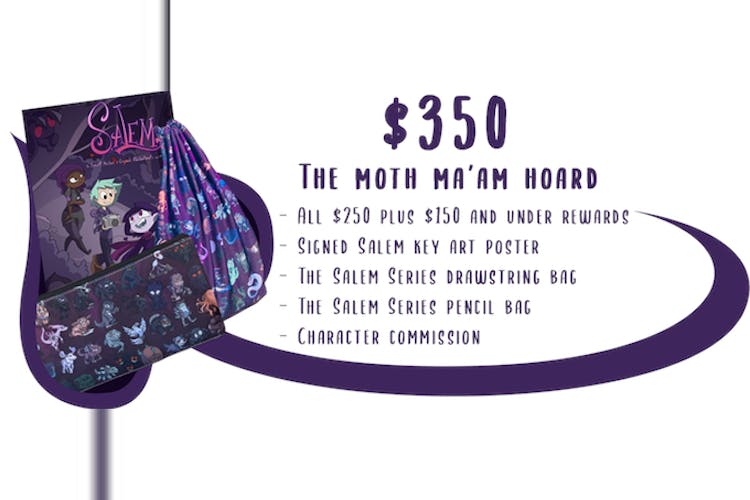 Do you have a cute character of your own? Or do you just want to see what YOU would like look in the SALEM style? Now here's your chance! With this reward tier our amazing illustrators will draw YOUR character in the style of the Salem Series! (Fully colored)No one likes sweet deals more than The Moth Ma'am! With this reward, we're aiming for the best of the best. You're an integral part of helping us create this series, so as a thank you we wanted to make sure you receive everything S.A.L.E.M. as a big thank you from us!

This reward includes everything in the $250 tier as well as a character commission. 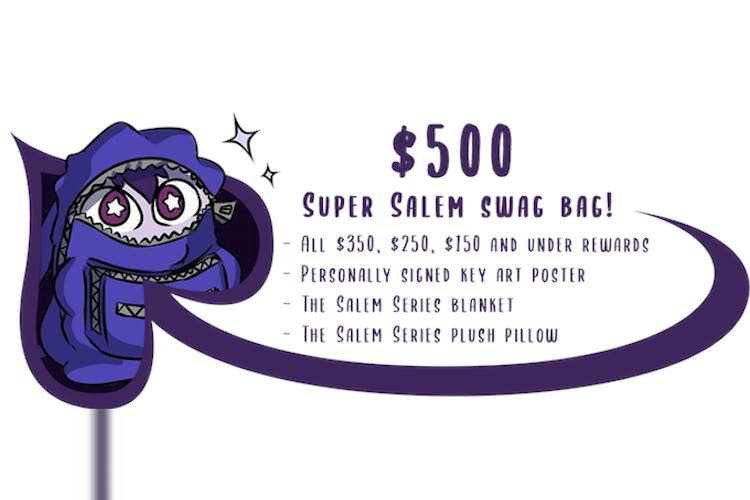 Do you want ALL the physical rewards? All the amazing goodies we have to offer? Well, look no further! With this reward, you will get ALL of the fantastic treats we have! With this reward you’ll get a few unique, Kickstarter exclusive items. Such as:- S.A.L.E.M. series plush pillow- S.A.L.E.M. series blanket you will receive all other reward tiers as well! Please note, this tier does NOT include a character commission.

This rewards everything in the $350 tier. 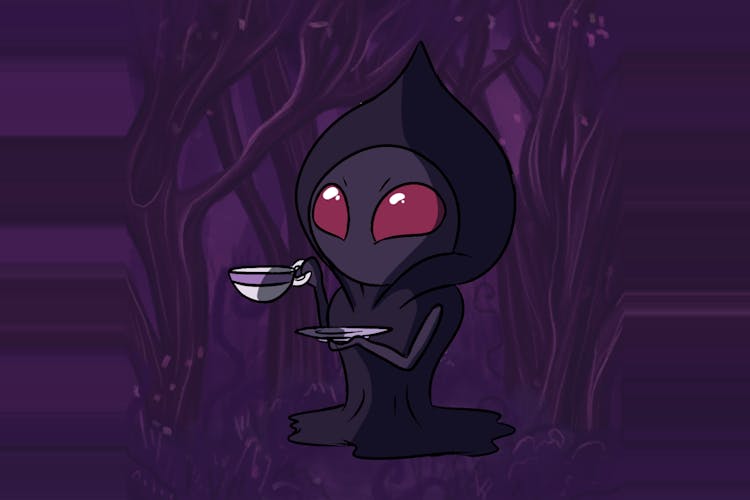 Wicked witches, you're a legend! More incredible than Bigfoot or the Loch Ness Monster!

With this reward you will become an official PRODUCER of the show with your name in ending credits.

-TWO tickets to the LA premier
-Airfare (within the continental USA only)
-2 nights accommodation
-After party hang out
-Transportation TO and FROM the event
-Dinner with the creator and EP of S.A.L.E.M.
-Two ultimate Salem Swag bags! ($500 tier!)

Also: You have our everlasting gratitude - we can't wait to meet you!!

(Please note that airfare is for continental USA only. If you are international, Hawaii, or Alaska, please just shoot us a message about additional airfare cost.)

Pre-Order $10,000
Did you miss or lose the link to complete your Survey? Retrieve it here