'The Terminator RPG' is the official roleplaying game based on 'The Terminator' movie and associated graphic novels published by Dark Horse comics.

Join the Human Resistance. The world is a wasteland—broken by the machines we built. Our own creations, our own hubris. Not in some distant future. Today. Now. The machines think they have won.  But there is one last chance for humankind, a secret weapon that Skynet in its infinite calculations could never have anticipated—you.

Play in any time zone—including the 1980s and future war. All the main characters from the movie, such as Sarah Connor, Kyle Reese, and the T-800 are included, as is content from the graphic novels and all all-new, never seen before Terminator variants and hardware.

The rulebook includes two mission packs, enabling you to relive 'The Terminator' movie and to join the fight to bring down Skynet in a not-so-distant future war.

More than a game. 'The Terminator RPG' is not just a role-playing game—it's a sourcebook for the first Terminator film and its expanded universe. Settings writer Andrew E.C. Gaska is known for his development work on the expanded universes of ALIEN, Predator, and Planet of the Apes. Like those projects, 'The Terminator RPG' extrapolates from hardcore existing canon to create a living and breathing world with a multitude of possible and probable timelines. Any Terminator fan will want this gorgeous book on their shelf, whether they intend to play or not. 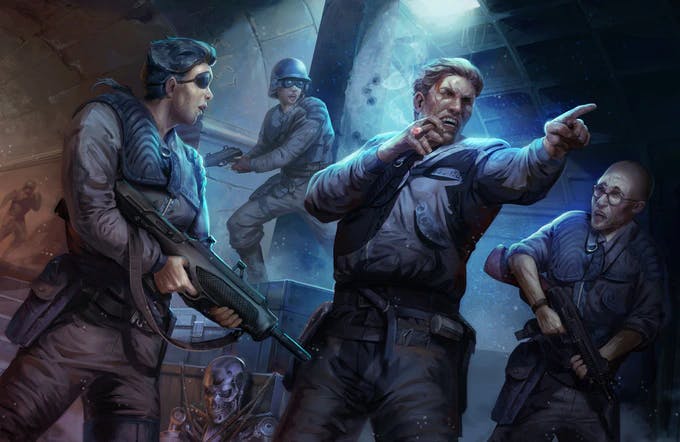 In ‘The Terminator RPG’, you play resistance fighters struggling against the machine onslaught of Skynet in an alternative and post-apocalyptic version of today—the once "far future" of the 2020s. You can take the role of rebel time travellers sent back to various points in time to stop Skynet from altering history. You can even play natives of any historical time period, targeted by Terminators and trying to stay alive as a future hell is unleashed around you.

The book is designed as a toolbox to allow the Director to create their own campaigns or one-shots, including detailed multipage campaign arcs, campaign seeds, mini-missions, NPCs, weapons, detailed locations, and enemy characters.

You have the option to play either pre-generated characters or to create your own—tailored to your preferences, weapon choices, and role within your team. If your character is killed, a new one can be brought in from the future, past, or present. That new character can be many things—including even an alternate you from a divergent timeline.

The game has been built from the ground up to both evoke the tone of the film and place you in the middle of the action. The terror and desperation of facing unstoppable killing machines are yours to bear. Only united with your fellow resistance fighters can you hope to defeat them. 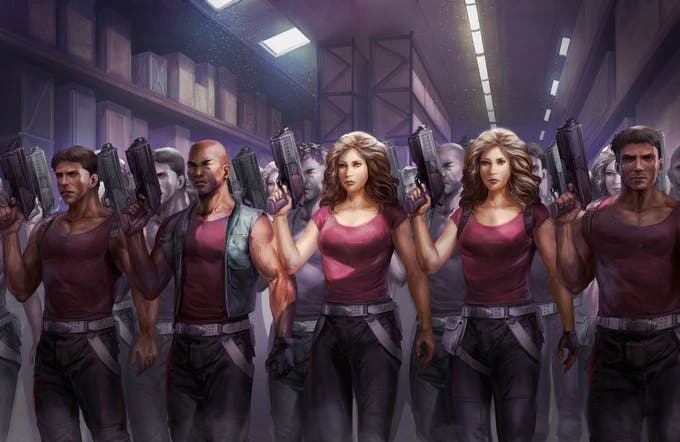 'The Terminator RPG' features the Nightfall Games’ S5S system, first seen in SLA Industries 2nd Edition. The S5S is a d10-based rules system. At its core, this system uses a pool of dice, one Success die, and five Skill dice per player. The more skilled your character is in the task being attempted, the more likely you are to succeed and "succeed big." 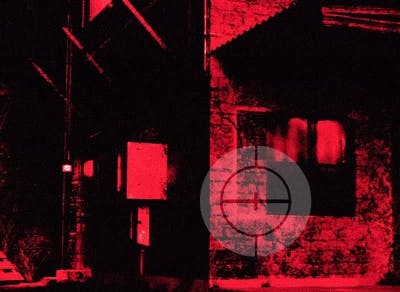 The rules set has been tailored specifically to The Terminator setting. Combat, survival, and investigation are all dealt with in the rules, along with vehicle combat, time travel, and computer hacking, allowing your character to take control of the conflict with unique skills and training. You'll need all of this and more to take the fight across the timelines and survive. 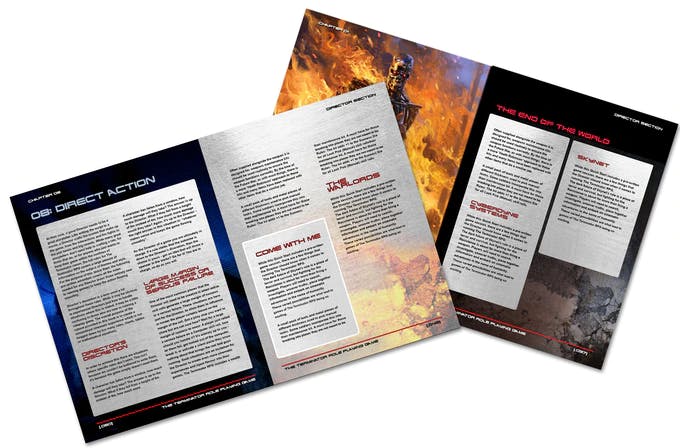 'The Terminator RPG' will be a lavish 192-page hardcover book with full-colour illustrations throughout, giving you an engrossing study of the expanded world of 'The Terminator'.

Much of the writing is now in the editing stage. Dynamic design and page layout has already started. The book includes a detailed overview of the future war, the history of the key characters, the game rules and stats, a hardware section (including a novel system to ensure only appropriate weapons and hardware are included at a particular time point). Other chapters will include character creation, a Director's Guide, and pre-constructed missions including NPCs and Terminator variants.

This Quickstart PDF offers a 'rules lite' look at the new system and provides seven pre-generated characters and an introductory scenario for up to five players. Go give it a go! 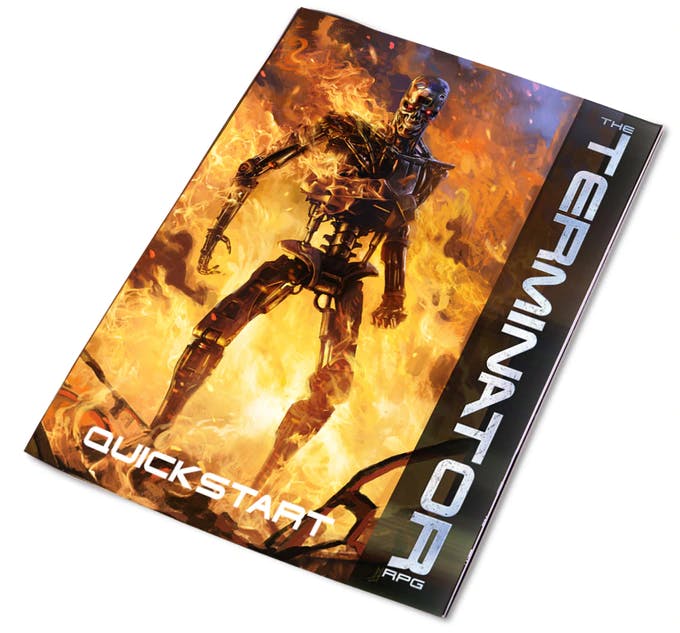 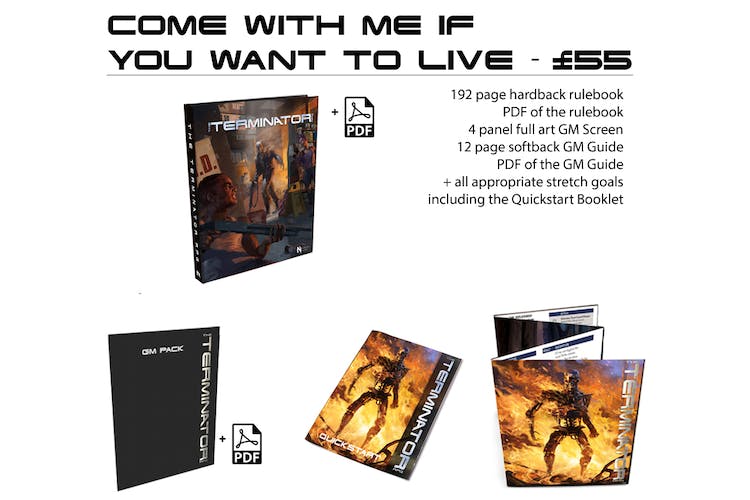 'Come with me if you want to live' 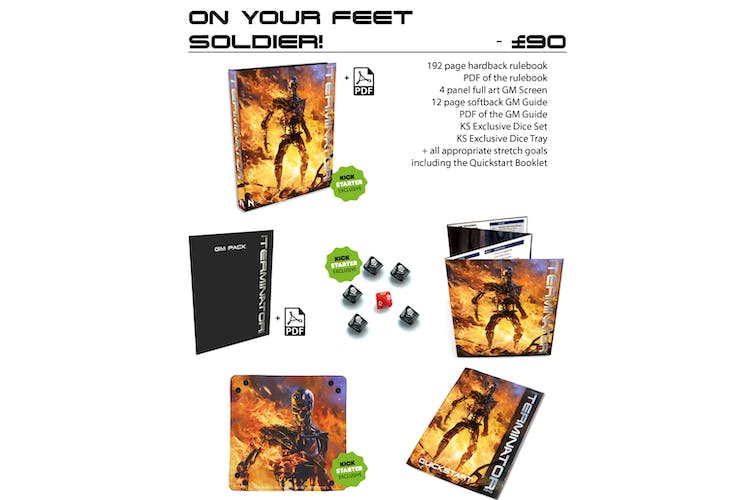 'On Your Feet Soldier!' 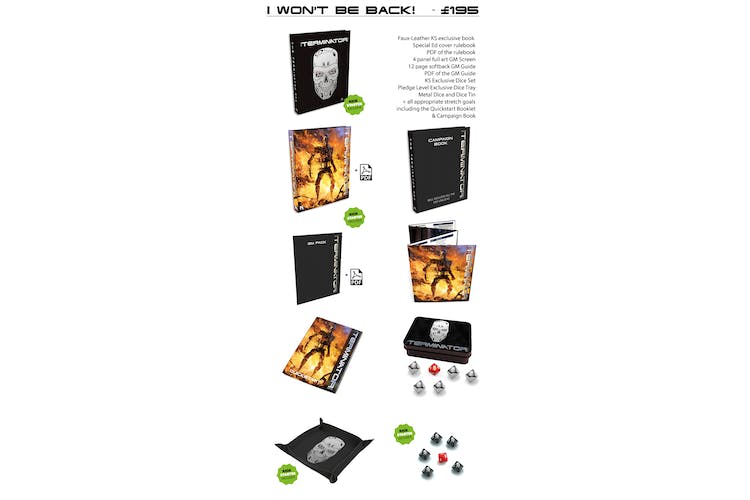 Pledge £195
Did you miss or lose the link to complete your Survey? Retrieve it here