THE PIONEERS
A Cinemagic Flipbook Collection 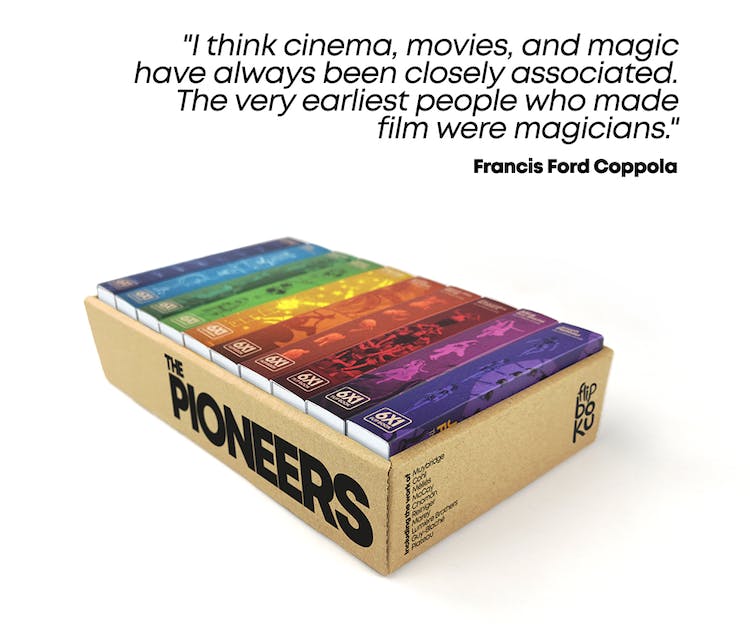 Needless to say, we fully agree with this. We had been dedicated to filmmaking for more than 20 years before we embarked on the adventure of starting our own flip book publishing house, and we loved the idea of doing a project that combined both worlds: flip books and cinema. 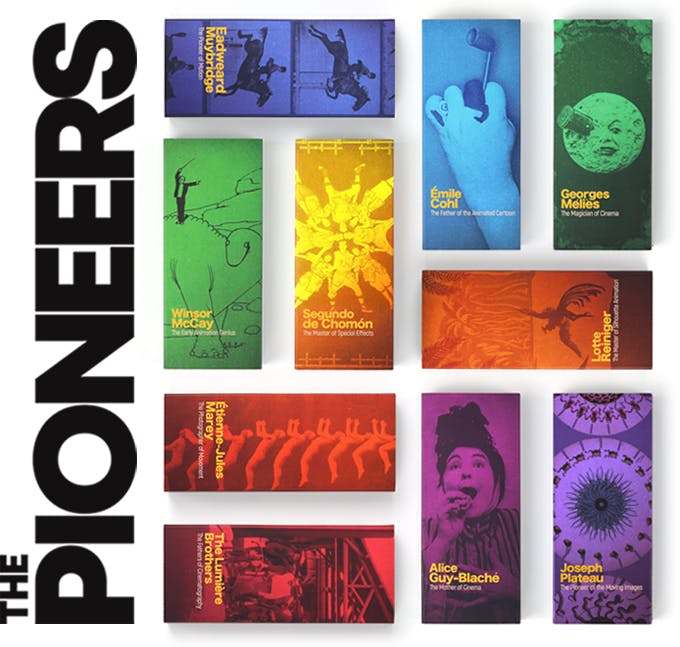 THE PIONEERS is a tribute to these very earliest trailblazers. A collection of ten cinemagic flip books that represent the essence of their works, the very first projects involving the moving image ever made.

This collection is a declaration of love for those pioneering talents who sowed the seeds of a revolution that is now a fundamental part of our lives: the cinema.

It was no easy task to narrow down the selection of outstanding pioneers to ten. In the late 19th and early 20th centuries, these innovators spent years refining their techniques, implementing new technologies and discovering unique optical tricks in no way inferior to those of modern-day YouTubers and TikTokers.

During our research we kept coming across female pioneers, great creators who managed to assert themselves in a male-dominated world, but unfortunately very few of their works have survived, and they have now largely fallen into obscurity. We are proud to include two of them, namely the great Alice Guy-Blaché and Lotte Reiniger, in this selection.

Finally, we have come to a great lineup of ten visionary figures, who we consider to be major revolutionaries in their field, whether from the primitive beginnings of the moving image, such as the phenakistiscope and chronophotography, or from the early days of cinematography, animation, optical tricks and the first forms of on-screen narrative.

Scroll down to discover each of the people who make up this collection in more detail.

Those of you familiar with the Flipboku flip books know that we like a little magic! Our flip books feature a clever trick that owes its success to a sophisticated assembly technique, and this is why we call them cinemagic flip books. As a result, when flipping the pages of the book, you can see up to six different animations instead of one or two like in a normal flip book. Let the entertainment commence!

This eye-popping optical illusion allows us to include an impressive 60 film sequences in The Pioneers Collection, representing the first decades of the history of the moving image, from the phenakistiscope to the first colorized films.

Our cinemagic flip books are surprisingly easy to use and provide an unfailing source of delight to viewers of all generations.

But there’s more to discover with this collection: in addition to the six film sequences hidden inside the flip book, each edition features a micro-documentary on the life of the respective pioneers, which adds an extra dimension to the experience of learning about their work. These documentaries will be incorporated into each of the flip books using augmented reality and are viewable by simply scanning the cover with a smartphone or tablet.

This feature allows us to add another dimension to the Pioneers Collection as well as an extra educational resource - it's a great way to learn more about each artist's life, their background and their most outstanding works. The feature will be available thanks to an easy-to-use iOS and Android app developed by our friends from Artivive, a revolutionary AR company based in Vienna, Austria.

To access the AR content, simply scan the QR code included in the flip book, install the Artivive App, open it and view the flip book on your screen. Easy peasy!

It was important to us to not only create a pleasing artifact for people's bookshelves but also to give the edition an additional educational purpose, bringing the stories of each pioneer to younger generations in a fun and interactive way. We have taken the collection to schools and film schools and have received exceptionally good feedback both from the students and teachers.

Students can discover the film material in an engaging interactive way using a medium that represents a precursor of cinema itself, while at the same time, thanks to augmented reality, the collection bridges the gap between old-school and cutting-edge technology. A truly unique educational tool for all generations.

For this edition, we have taken great care with the details. 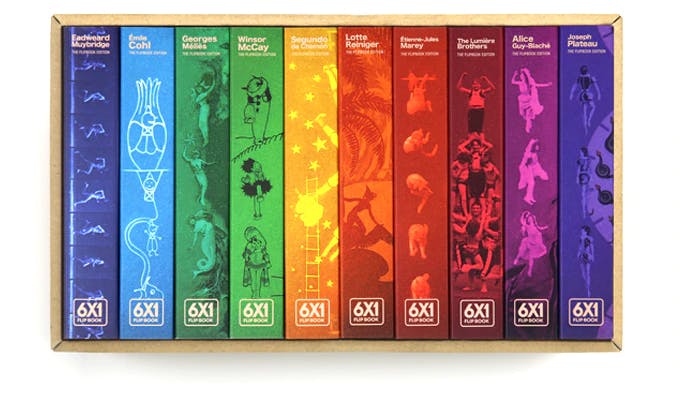 Since most of the sequences are in black and white, we liked the idea of contrasting the design with a vibrant color palette, using elements from the film footage for the cover pages and sleeves.

Some of the creators, whose projects preceded the cinema itself, worked with inventions such as the phenakistiscope in the case of Joseph Plateau or chronophotographic techniques in the case of Étienne-Jules Marey and Eadweard Muybridge, and we have turned these into animations in order to see them in action. In the case of Marey, because these are overexposed photographs that capture movements in action, the result is pretty astounding.

For the other filmmakers, we have researched and watched hours of footage from each of them, finding truly extraordinary treasures, and although we have tried to provide a balanced selection of their filmographies, it is impossible to do them complete justice after discovering so much wonderful material.

Once all the material was selected, we proceeded to subject them to digital restoration and then focused on the design of each edition.

We've created an exclusive limited edition reward that includes, besides from the Pioneers Flip Book Collection, a unique print of Étienne-Jules Marey's backflip jump chronophotography.  This technique was achieved by overlapping celluloid prints one on top of the other, making it possible to discover the different stages of movement, in order to study their relationship to each other in a single image. It is without a doubt one of our favorite images. This reward also includes the full set of AR postcards created exclusively for the campaign.

For this campaign we have come up with several appetizing bundles, which may eventually find their way onto your bookshelves.

By way of a taster, we’ve created an attractive set of 10 cinematic postcards, one for each filmmaker, perfect for mailing or to be used as bookmarks. Like the flip books, these postcards include the augmented reality feature and each of them will reproduce a micro-documentary with extra information when scanned through the Artivive app on your smartphone or tablet.

Flipboku is the brainchild of animator and designer Jossie Malis and film music composer Julie Reier. We have both been working in the world of film for many years and love all things related to animation, books and design. We loved the idea of having our own flip book publishing house, so we started the project in 2016 and it has grown steadily since then.

Today, the Flipboku team is made up of seven members, all working in our design and printing studio Boku Lab in Palma de Mallorca, Spain. The rest of the team consists of the invaluable hands of our two illustrators and graphic designers Noemi Aiolo and Erika Godino, and our irreplaceable production technicians Gustavo Berdayes, Tomás Pons and José Ramón Pineda, responsible for the entire production process. 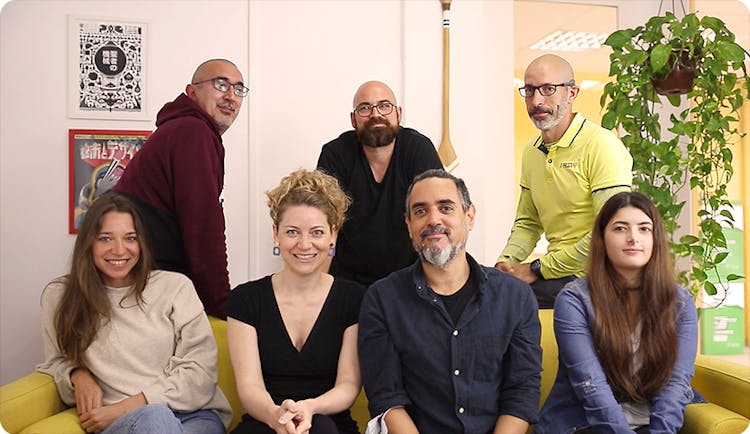 Since 2019 we have had our own printing workshop where 100% of the production is carried out. This means that the entire production process is under our control, allowing for precise results and finishes, in harmony with our commitment and obsession with design and quality. It took us several years to refine our cinemagic flip books and their optical illusion features, but thanks to the talented hands of our experienced print masters, we were able to fine-tune the concept to perfection.

Here you can get a glimpse of the super effective teamwork of the Boku crew:

Even though we are already experienced flip book makers, there’s a lot of work that goes into developing an entire collection like The Pioneers. We’ve spent endless time researching, going through hours of film footage while contacting museums, film archives and production companies to find the best material. Then we had to restore and set up each of the 60 sequences and make them suitable for a flip book format.

Now we need your help to complete the final step – to bring the flip books to life and get them to the printers. While our print team works on the production, we’ll focus on planning the development and production of the ten micro-documentaries, one for each author.

Therefore, we’ll need even more footage from archives that needs to be edited and subsequently processed; ten scripts have to be written, voice-over-recorded and mixed, which also applies to the music for each film. Finally, all this content has to be integrated as augmented reality into each flip book. 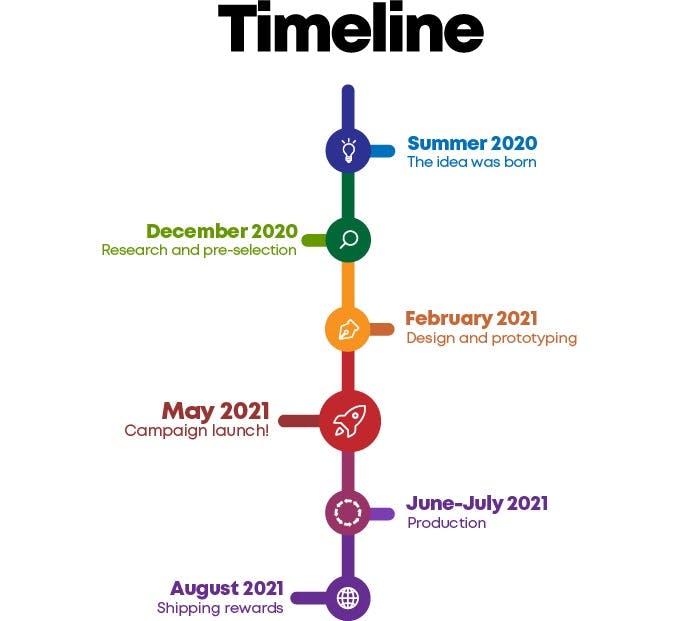 Shipping will be charged AFTER THE END OF THE CAMPAIGN, during the survey stage.

Below is an estimate of shipping costs broken down by shipping area. These are only estimates; however we commit to these prices being the maximum amount you will have to pay.

All individual flip books and bundles can be added to your pledge AFTER THE CAMPAIGN and at the same cost. We intentionally chose not to offer Kickstarter add-ons within the campaign to keep the survey process as easy as possible for everyone. Shipping costs for add-ons will be charged by weight; this way we can calculate them as precisely as possible. 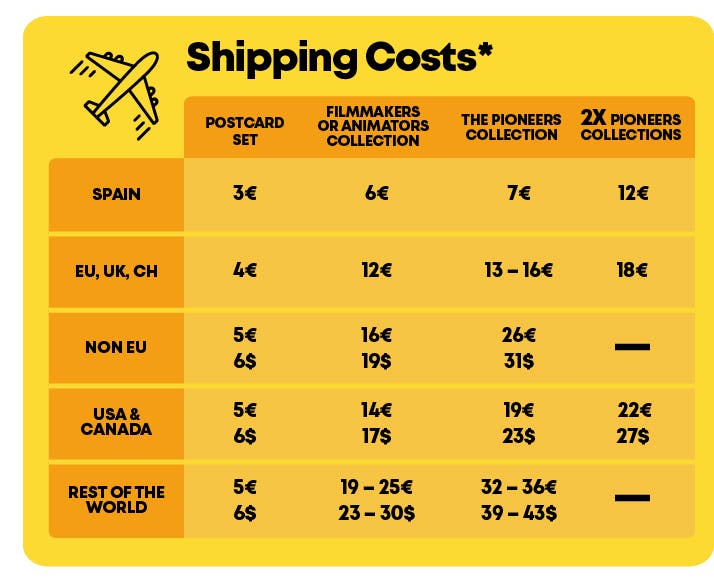 *Shipments for all flip book bundles will include tracking. For the postcards you will be able to choose between tracked and ordinary shipping; the price list shows ordinary shipping rates. The shipping costs are expressed in Euros and US dollars.

We are extremely grateful for your support and would love to see you on board! 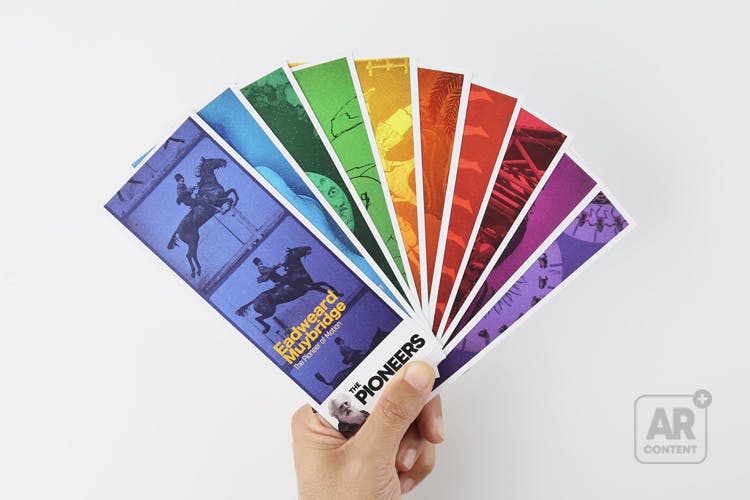 Receive 10 beautifully-designed augmented reality postcards, one for each pioneer. Perfect for mailing, displaying at home or using as bookmarks, these cards can be activated with a free iOS and Android app that will bring a micro-documentary to life for each card on your smartphone or tablet. 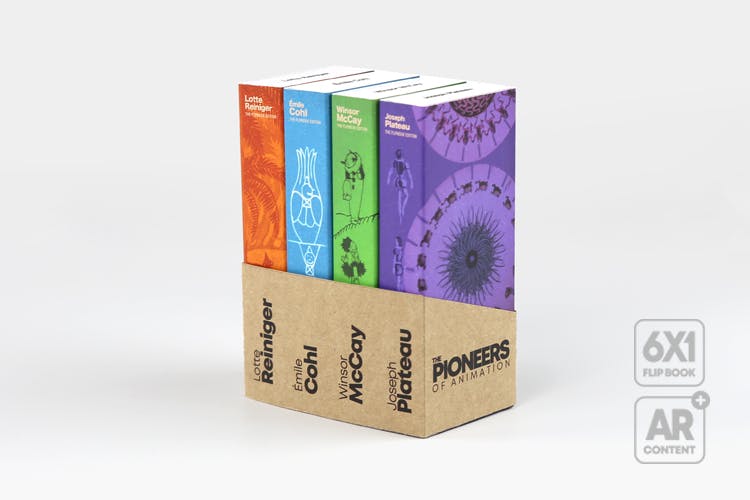 Receive FOUR magic flip books dedicated to the pioneers of animation: Joseph Plateau, Émile Cohl, Lotte Reiniger and Winsor McCay. Each flip book triggers six different sequences depending on the position of your thumb, which means that all together you'll have 24 original film sequences. Every flip book features an AR micro-documentary that can be activated through a free iOS and Android app on your smartphone or tablet. 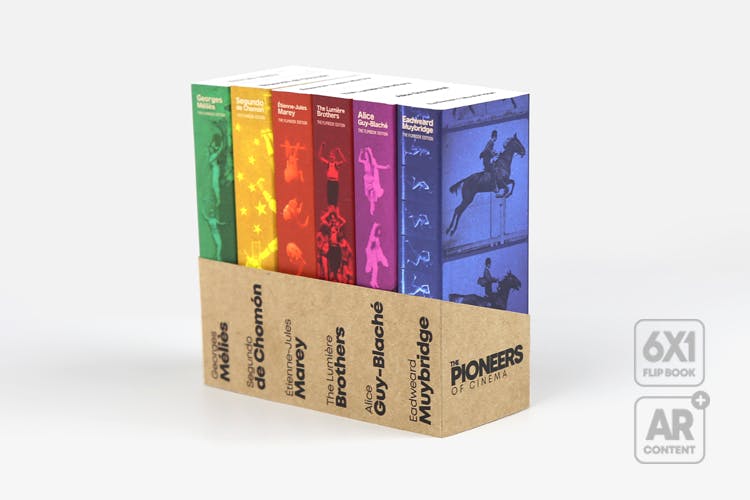 Receive SIX magic flip books dedicated to the pioneers of film and photography: Eadweard Muybridge, Étienne-Jules Marey, the Lumière brothers, George Méliès, Alice Guy-Blaché and Segundo de Chomón. Each flip book triggers six different sequences depending on the position of your thumb, which means that all together you'll have 36 original film sequences. Every flip book features an AR micro-documentary that can be activated through a free iOS and Android app on your smartphone or tablet. 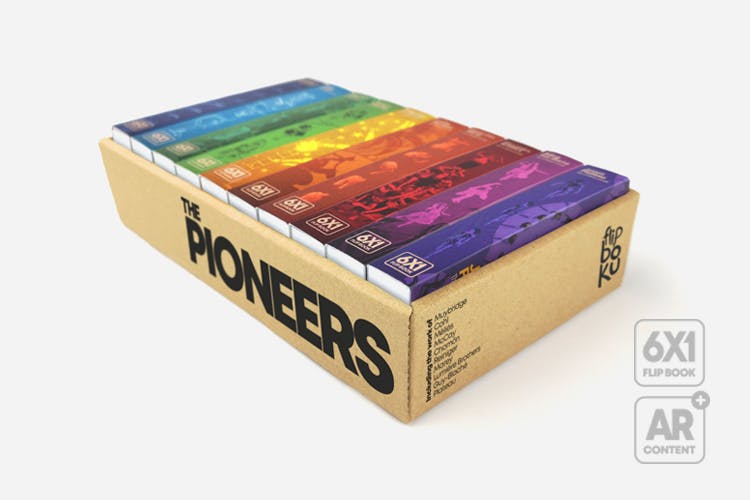 THE FLIP BOOK COLLECTION! Includes 10 beautifully designed flip books on the pioneers of filmmaking, photography and animation - the perfect collector's item for any film lover and a great educational tool for all generations. Each flip book triggers six different sequences depending on the position of your thumb, that means all together you'll have 60 (!!) original film sequences. Every flip book features an AR micro-documentary, and the entire collection includes additional AR content that can be activated through a free iOS and Android app on your smartphone or tablet. 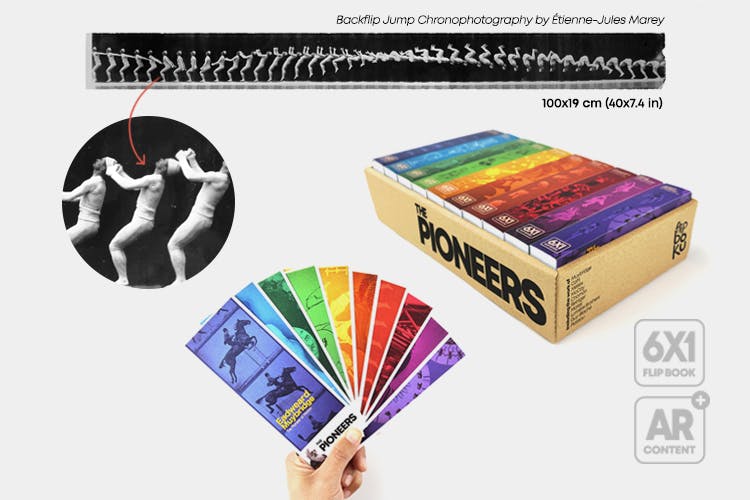 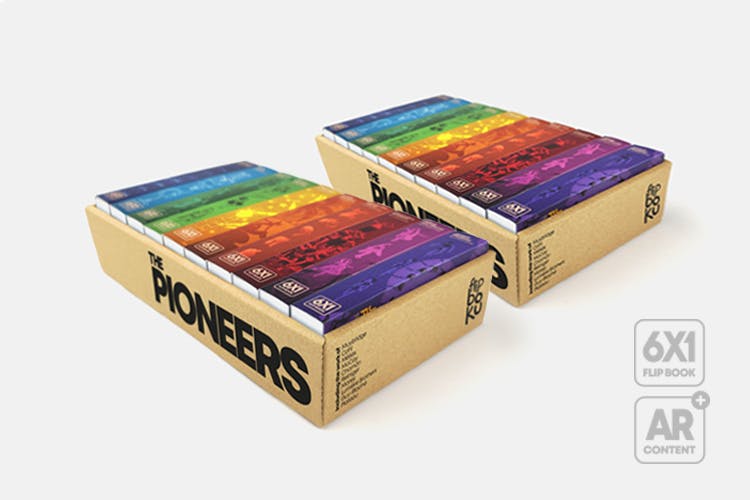 TWO FLIP BOOK COLLECTIONS! One for yourself and one for your favorite person. Each flip book triggers six different sequences depending on the position of your thumb, that means all together you'll have 60 (!!) original film sequences. Every flip book features an AR micro-documentary, and the entire collection includes additional AR content that can be activated through a free iOS and Android app on your smartphone or tablet.

Pledge €199
Did you miss or lose the link to complete your Survey? Retrieve it here