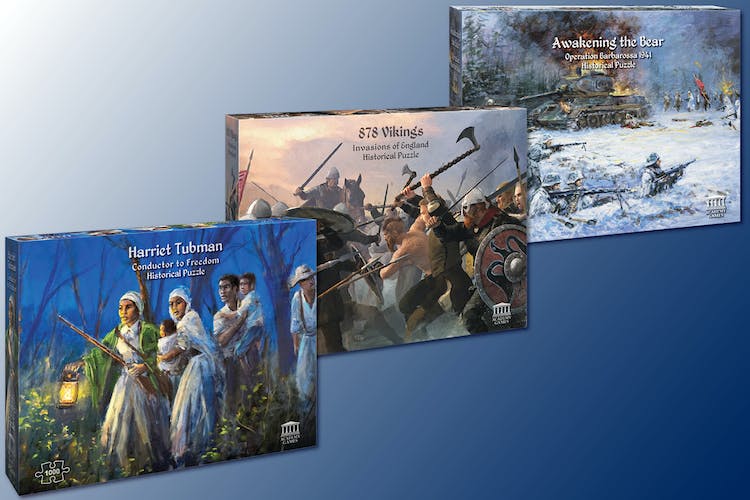 Enjoy all three of these Historical Puzzles! Each puzzle depicts a moment in history painted by some of the best current artists from around the world.

Pre-order this $75 bundle of all three puzzles for only $45! 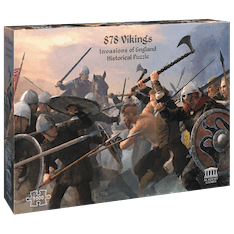 “This year came dreadful fore-warnings over the land of the Northumbrians, terrifying the people most woefully: these were immense sheets of light rushing through the air, and whirlwinds, and fiery dragons flying across the firmament. These tremendous tokens were soon followed by a great famine: and not long after, on the sixth day before the ides of June in the same year, the harrowing inroads of heathen men made lamentable havoc in the church of God in Holy-island, by rapine and slaughter.”
-The Anglo-Saxon Chronicles: 793 AD

Thus began the Norse terror in England and what we now call the Viking Age. Norsemen (North-men) would plunder, terrorize, and conquer the British Isles for more than 270 years, ruling the land under The Danelaw and threatening the foundations of Christianity. 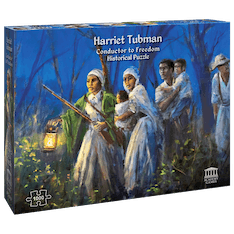 Harriet Tubman was one of America’s greatest civil rights activists and a hero for the abolitionist cause.

She was born the daughter of enslaved parents in 1822 in Cambridge, Maryland. After her owner died in 1844, her family was at risk of being torn apart and sold to new owners. In communication with other enslaved people and the Underground Railroad, Harriet escaped to freedom in Philadelphia, PA. Harriet then traveled back into the slave states many times, to help guide more enslaved people to freedom in New York and Canada. Each time she did this, she risked being captured and pressed back into slavery, or worse.

Harriet Tubman’s philosophy was exemplified by her own words: “I had reasoned this out in my mind, there was one of two things I had a right to, liberty or death; if I could not have one, I would have the other.”

A portion of each sale of the Harriet Tubman Historical Puzzle is donated to the National Underground Railroad Freedom Center in Cincinnati, Ohio. 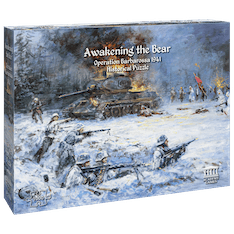 The Soviets then seized the initiative and began to shift the war’s momentum. The Soviet bear had awakened!